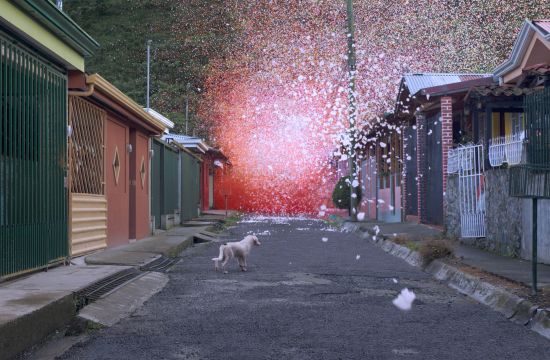 Sony today launches its latest TV advert set to bring to life the fine detail, breath-taking picture quality and rich colour you can only get through 4K - to mark the arrival of its 55” and 65” X9 4K televisions.

Created by McCann London, the ad features millions of colourful petals exploding from a volcano, rushing through exotic locations down to a Costa Rican village. Shot in surroundings that offer dramatic nature, landscapes and composition, the ad perfectly demonstrates Sony’s pioneering 4K technology which offers 4 times the detail of Full HD and allowing extraordinarily sharp, refined detail. The ad is set to a stunning track ‘Berlin’ which is the title of the debut release from LA-based Australian RY X, now available courtesy of Dumont Dumont.

Watching the ad on the X9 4K Ultra HD TV, the TRILUMINOS Display brings colour to life for an unbelievably real experience, giving an emotionally moving and astonishing feeling to the viewer. At the same time the unique to Sony, slim Magnetic Fluid speakers inside the TV add clear, powerful sound.

All effects were shot in real-life and filmed in 4K with Sony’s revolutionary F55 and F65 cameras, used on recent blockbuster movies ‘Oblivion’ and ‘After Earth’.

Continuing to keep things as realistic as possible and to ensure it was an ecologically and environmentally sound project; Sony used several tonnes of real and biodegradable petals which were locally and sustainably sourced.

Sony’s new 4K screens contain 8 million individual pixels therefore 8 million petals* were used in the shoot to further bring out the detail and vibrant colour through 4K without the need for computer graphics.

Director of the advert, Jaron Albertin commented, “I was really excited to be shooting this ad in 4K in such an amazing location. It was my first experience shooting with the Sony F65 and when I saw the final footage, I was stunned - it just produces really amazing, detailed images. Because there is twice as much data, it looks twice as crisp which means you can see even the tiniest detail.”

Gildas Pelliet, Head of Marketing, Sony Europe, also said, “Sony is famous for creating iconic commercials. We wanted to create a visually impressive and artistic advert that best demonstrates what you experience with a Sony 4K TV - 4 times the detail of current Full HD TVs. The ad has a cinema like experience with pin sharp images and dramatic scenery.” “When you watch the new ad on our X9 4K TV you can really see for yourself the fantastic clarity in colour; thanks to the exclusive TRILUMINOS Display technology. The 4K Ultra HD TV market is expanding rapidly and Sony is leading its development through our involvement in 4K from production of content through to 4K digital cinema and bringing the best 4K experience in to your living room.”

The ad officially launches with a 60 second coveted slot shown during The X Factor on Saturday 2nd November, the 30 second version can be seen from the 1stChatty Man on Channel 4.

The campaign will run on air for 1st TV, press, digital and search. The new ad is also be being shown in a targeted cinema ad campaign filmed and shown in 4K at Thor and The Hobbit screenings from 1st.

Featuring the 4K X-reality PRO engine to improve the picture quality of every day programmes and HD media libraries, the 55” and 65” X9 4K Ultra HD TVs are available in-store and online now and priced £3,299.00 and £4,999.00 respectively.

To see the advert in all its colourful and detailed glory, visit your local Sony centre or retailer, or visit your nearest 4K cinema. For more information on Sony 4K, see www.sony.co.uk/hub/4k

November including a premium slot secured during Alan Carr’s