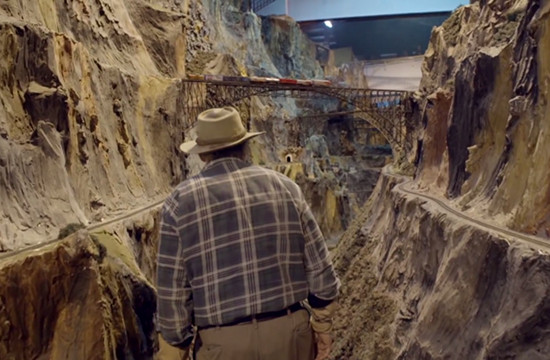 Last month Sony Electronics and Wieden+Kennedy debuted “Join Together,” the 90-second broadcast spot that launched the “Be Moved” brand campaign celebrating Sony’s longstanding history of merging artistry and engineering. Today they've followed up with another piece of creative that continues to reiterate this theme, a four-minute documentary called “Separate Together."

This time the agency and brand brought together Bruce Zaccagnino, the creator of the world’s largest model railroad at Northlandz in Flemington, New Jersey, and Matt Albanese, a photographer specializing in miniatures. The film takes place inside the 52,000 square foot exhibit space featuring dozens of tiny towns, three-story papier-mâché mountains and hundreds of toy trains snaking through a warren of tunnels, past tiny windmills and over bridges made from thousands of toothpicks. Using the Sony’s QX100, the team captured Northlandz like never before.

Through Matt’s photography, we start to see a hobby transform into an amazing work of outsider art. We also come to see how Sony’s QX100 camera is uniquely suited for the project because of its ability to fit into tight spaces and capture unique vantage points that simply aren’t possible with other cameras. The QX100 is a lens-style camera that can be detached from a phone using built-in Wi-Fi. It’s performance in low light and mechanical zoom lens where also advantageous in the strange landscape that is Northlandz. In some instances, the views are brought to you by the QX100 mounted to a small flatbed car and attached to a moving model train.

The documentary lives at an experience site: www.Separate-----Together.com (the extra dashes implying the separation of camera and phone).

Beyond the film, there is an interactive companion piece that allows visitors to explore Northlandz through the lens of the QX100. It consists of three panoramas each made up of hundreds of photographs all taken with the camera. Similar to Google Street View, visitors can rotate the lens to change their view, use a mechanical zoom to pan into the tiny details and take pictures to share with their friends.

PROJECT NAME BE MOVED: SEPARATE TOGETHER