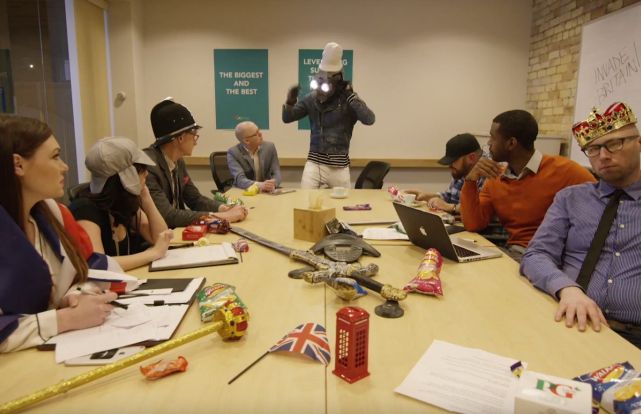 Sonobi, an independent advertising technology firm built for people-based media transactions across the comScore 250, today released its new ad campaign, “Beware of the Yank,” a film series for the UK depicting Sonobi’s popular Bro-bot character as everything that is wrong with the ad-tech industry.

Sonobi is introducing the Bro-bot in the UK following a successful string of major client wins, including Guardian Media Group. White Lightning + The Judge's Son (WLxJS) created the film as a follow-up to Sonobi’s critically acclaimed “Beware of the Bro-bots” campaign that debuted in the US last September. The “Beware of the Yank” campaign reinforces to the UK audience the idea that technology should help the business of creative communications, not simply profiteer on it.

“This campaign will say to the market, ‘We get it.’ We understand what clients are going through and what they think of the industry, and we are determined to work with them to fix the problems and improve their experience,” said Gareth Holmes, MD EMEA at Sonobi. “The series of short films is our way of saying we know what has come before us and we are not happy to settle for the status quo. Sonobi wants to make things easier, by making the buying and selling of digital media more efficient, and offering complete transparency, while doing so with personality.”

John Donahue, Chief Product and Marketing Officer at Sonobi, continued, “When you look at the ad-tech sector, the marketing efforts are simply terrible – buzzwords, BS, and overly salesy tactics with a lack of focus on holistic value creation through product. It’s time ad-tech companies realise we’re all in the business of creative communications, and start marketing themselves that way. We’re building technology to create value and not extract it. For us, we hope agencies, brands and publishers that see this film have a greater connection to Sonobi, because of the empathy we feel towards their business challenges.”

The film parodies the bad practices and lack of honesty that are rife in programmatic advertising. It depicts Bro-bot “Bryn Bottenfeld, CEO and Chief Disruptor” at fictional ad-tech firm Adifibly. After a successful run in the US, Bottenfeld expands Adifibly to the UK with the need to sell ‘vapourware’ in a bid to siphon more media spend away, keeping the business afloat and disrupting the advertising business.

For Sonobi, Bottenfeld was created to be the antithesis of everything Sonobi stands for. Sonobi’s core product, JetStream, is built to enable publishers, agencies, and advertisers to have full insight into the size of the opportunity against every buy, relative to the buyer’s audience and with full transparency on technology fees. JetStream provides an honest approach to campaign planning, buying, and delivery around people and audiences.

For its UK campaign launch, Sonobi will run 'Beware of the Yank' ads on YouTube beginning today, and across Twitter, Facebook and LinkedIn, as well as JetStream’s viewable display and video. To learn more about the campaign, click here.

Hair and Make Up: Jansel Hutton