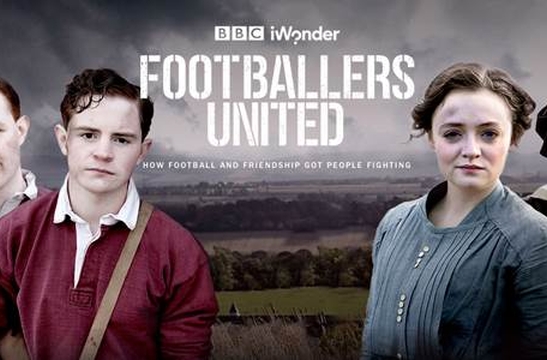 The BBC is today launching a brand new interactive drama, Footballers United, as part of its World War One season. Footballers United combines fictional and archived content to tell the true story of a community and characters surrounding the Heart of Midlothian football team from 1914-1919 in Scotland.

Produced by Somethin’ Else and written and directed by Alex Winckler (My Mad Fat Diary, Hollyoaks), the drama is available at footballersunited.co.uk via desktop, mobile and tablet. It follows the stories of both the men and women, in Edinburgh and around the country, whose lives were forever changed by World War One.

Gemma Fay said: “This global war had a huge and devastating effect on men, women and a whole generation. What I find really interesting is the culture change that happened in everyday life, with women gaining a new sense of freedom and new responsibilities; from starting to work in factories to things that for us today feels obvious, like being allowed to play football. I can’t imagine what it was like when the war ended and society was meant to somehow revert ‘back to normal’. I think Footballers United tells the story of this very important change of a young generation then, in a way that a young generation can relate to, now.”

Sinead Rocks, Head of BBC Learning, said: “BBC Learning is exploring new and innovative ways for the BBC to create engaging, informative and entertaining content for our audiences, and Footballers United is a perfect example of this. This interactive drama blends high quality video with archived content in a way we’ve never done before; which not only gives the story depth but brings an important topic like WW1 to a new and contemporary audience.”