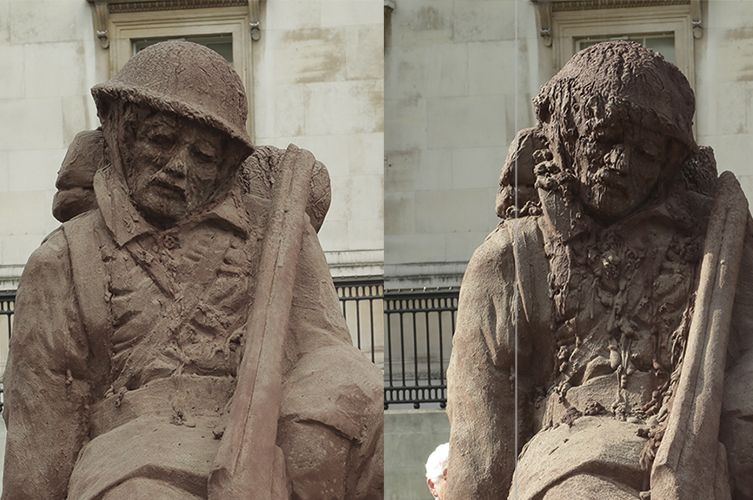 To mark the centenary of the Battle of Passchendaele, VISITFLANDERS and Ogilvy & Social.Lab Belgium collaborated with the Westminster City Council to unveil ‘The Mud Soldier’.

During this week, the Belgian tourism agency continues its 5-year WWI commemoration programme with a striking, poignant reminder of the conflict marked by endless rain and inescapable mud. The battle resulted in 475,000 soldiers wounded, dead or missing.

Crafted with sand mixed with mud from Passchendaele, Flanders Fields, Belgium, this temporary sculpture is displayed on the North Terrace of London’s Trafalgar Square for just four days. ‘The Mud Soldier’, slowly dissolves as it’s exposed to rain.

This dramatic piece highlights the collective sacrifice of those who fought in this significant battle in 1917, known for its atrocious weather conditions.

Due to persistent heavy rain that fell at the time, soldiers battled in thick sludge-like mud. Men and horses drowned in the conditions during the relentless warfare. The shocking environment was poignantly captured by English poet-soldier Siegfried Sassoon, who wrote: “I died in hell. They called it Passchendaele.”

Passchendaele, also referred to as the Third Battle of Ypres, remains one of history’s most debated battles, questioning its strategic value and lamenting the horrific loss of life.

The young artist behind the work, Damian van der Velden, is a graduate of the Royal Academy of Arts of The Hague. Having trained as a professional painter she works in various disciplines with her work being exhibited in Belgium as well as in other European cities. She explains, “I was trying to get the emotional or exhausting feeling that the solider has to have at that moment.”

The sculpture was unveiled by the council’s Armed Forces Champion Cllr Rachael Robathan. She commented, “It was an honour to unveil this sculpture in the heart of Westminster, the home of two brave VC recipients killed on the first day of the Battle of Passchendaele. We will never be able to comprehend the horrific conditions soldiers faced during that battle but this sculpture is a fitting tribute to their sacrifice. In four days, this striking artwork will have vanished but it will have made a lasting impression on the thousands of people who visit Trafalgar Square and beyond.”

Andrew Daines, Director of VISITFLANDERS, UK and Ireland said: “We hope that this art installation will inspire the visiting public to think about this milestone year in the Centenary of one of the First World War’s most horrific battles. Art can provide more powerfully, the deep emotions brought forward by war and the Mud Soldier represents those feelings in more of a thought provoking way, even stronger than words can express”.