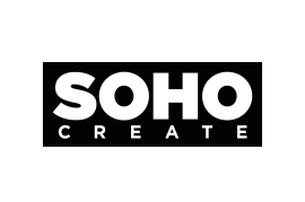 SohoCreate – London’s new festival celebrating the most creative square mile in the world has announced a curated tour of four of Soho’s most established and well-respected post-production and sound specialists, GCRS, Major Tom, Dolby and The Mill.

The one-day ‘Post Production Open House Tour’ event (Thursday 4th June) will lift the lid on the post-production process, providing brands and agencies a unique opportunity to learn how budget is spent (from the brief to production), ask questions directly to the experts and gain a unique insight into how brand visions are made into a reality.

From 3-7 June, Soho will be buzzing with ideas, discussion and debate as the world’s leading creative minds from across all genres of the arts - music, film, art, theatre, fashion, literature, food, architecture and gaming converge to talk about what, how and why they are creative.

Alongside the main programme, many of Soho’s creative businesses will throw open their doors to give people an insight into their working processes, allowing professional audiences from all industries to engage with leaders in a number of areas including post-production, food, VFX, games, fashion, art and music. ‘Open Houses’ are free and will include screenings, demonstrations and talks from the experts as well as offering a chance for audiences to get involved.

The square mile of Soho is the most creative in the world, with over a quarter of Soho’s entire workforce employed in the creative sectors, responsible for ten per cent of the country’s creative turnover and twenty per cent of London’s new creative jobs based there.

SohoCreate was set up in 2014 by Tom Harvey, MBE, alongside Westminster City Council, with the sole purpose of championing creativity; creative people, the risks they take, the dreams they have and the journeys they embark on to pursue them. Having worked in the creative industries throughout his career, Tom wanted to celebrate the extraordinary creative output from Soho and share the wealth of knowledge it harbours.  In fact, research suggests that the concentration, turnover and output of creative industry workers in the Soho Cluster makes it the most creative square mile in the world.

Tom Harvey, CEO and Founder of SohoCreate said: “SohoCreate is a festival for everyone. We are all creative. The strength of our dreams, imagination and subconscious is a huge part of what makes us human; it’s also what drives our creativity. It’s our creativity that helps us make sense of the world around us and it’s the small creative acts we participate in every day that keep us connected to other people and the world around us.  SohoCreate is open to everyone - it’s an inspiring gathering of the best creative talent, discussing their art, inspiration and journey. Creative people talking about what they do and why they do it."

Carole Humphrey, Managing Director of GCRS said: “We are so pleased to be able to participate in Soho Create to remind the world what makes Soho unique which is the recording studios and record shops, theatres and clubs, production companies and post houses that all contribute to a macro economy, make a major noise and punch above their weight on a regular basis. 25% of the people employed in Soho works in these creative industries. To keep the Soho vibe alive we need to evangelise about WHAT we do and SohoCreate has arrived at the right time in the history of our square mile (140 acres) to do that."