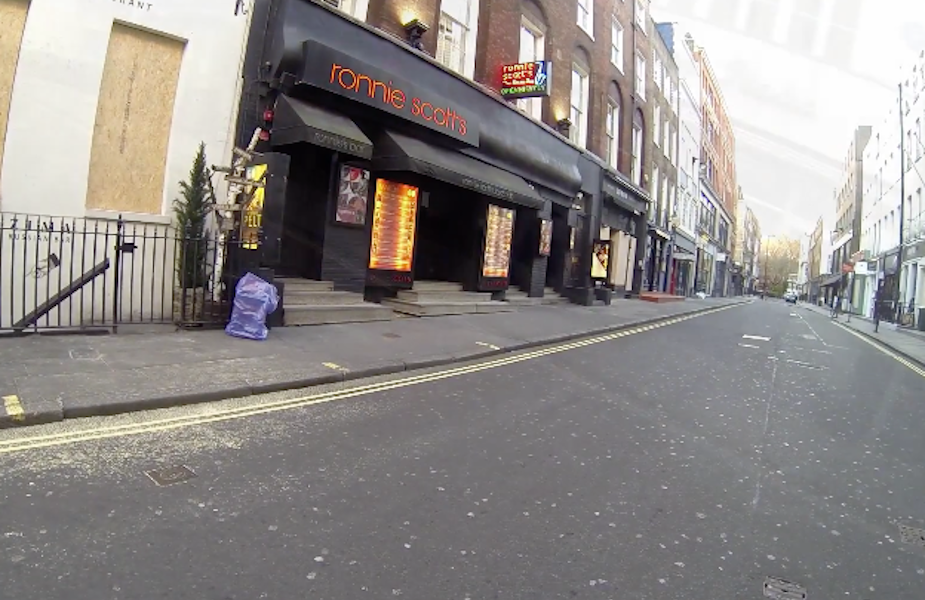 Soho Lockdown shows the once busy streets empty, reflecting the reality of the world being hit with the coronavirus pandemic.

It was shot by Pablo Behrens, director of the film 'Adrift in Soho' on March 24th at 5pm the day after the Covid-19 lockdown of London was imposed.

"When I heard of the lockdown I took the opportunity to do some exercise complying with the lockdown rules but I also attached my GoPro camera to the handlebar and let it run. It was an eerie experience".

"I remember how Soho was only a few weeks before. Super-busy as usual." Now, everything closed.

Pablo Behrens also produced 'Adrift in Soho' which will be out on worldwide online release on June 2nd this year, distributed by US company Random Media. "For my film I tried to use all the creative services that Soho has to offer. From actors and characters to offline editing, sound post and grading. I needed technicians that would understand the area's creatively. The result was amazing."

"Soho will bounce back, l'm sure, like the rest of London.  But I want everybody to take stock and remember what a fantastic creative square mile we have in Soho. You can still produce a commercial or film from start to finish without leaving the area.  Let's all get back to work for that to continue and then the cafes, restaurants and nightclubs will be full again."

Pablo Behrens is also the London representative of Metropolis Films Latin American Production Services which contributed in the post production of his film with the opening credits sequence.

Metropolis Films hopes that Soho will soon return to the vibrancy we know it for. Let's keep Soho as the world's most creative square mile.  We all need Soho, wherever you are. The Silicon Valley of the film, advertising, internet and television industries.

Metropolis Films are ready to support Soho from South America in any way it can within the guidelines imposed by the WHO and national governments worldwide for the next few months.