Sofia Coppola Gets in the Christmas Spirit for Gap 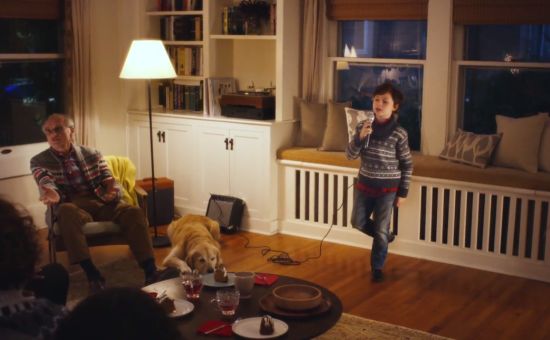 Gap, the iconic American clothing brand, has revealed its new Holiday films directed by Sofia Coppola (Lost in Translation, Somewhere, Marie Antoinette, The Virgin Suicides). The Academy Award-winning director has directed a series of four films celebrating the uniqueness of family during the Holiday season. The films are entitled Gauntlet, Mistletoe, Crooner and Pinball.  Gauntlet and Mistletoe will appear on television in the US and UK.  All four will appear in cinemas, digital banners or via Gap’s social media channels around the world, starting November 3.  The campaign continues the Dress Normal message launched in the Fall, with the hero tagline ‘You don’t have to get them to give them Gap.’

In Gauntlet, a young woman arrives home as Thanksgiving is in full swing and is greeted by a myriad of excited family members. She is wearing the season’s must-have trend – the crazy stripe sweater. Mistletoe sees a younger man sheepishly approach a lady at a party who happens to be standing under mistletoe.  Crooner showcases a young boy lip-syncing to a classic song in front of his family, many of them in Gap Fair Isle sweaters.  Pinball finds a twenty-something woman intently playing the game in the only restaurant still open during the Holidays as her boyfriend watches from the booth.  Each film plays out to a classic soundtrack: Gauntlet is set to “I Got Stripes” by Johnny Cash; Mistletoe features “I'm Not Ready for Love” by The Promise, Crooner is set to “Cry” by Johnnie Ray and Pinball features “Deep Down” performed by Hazel and the Jolly Boys.

The films, developed with Gap’s global agency, Wieden+Kennedy New York, are supported by a print campaign that continues the theme of the challenge of buying gifts for a myriad of family and friends.  This includes an image of a woman jumping on a bed in her Fair Isle sweater with the caption, ‘when all you really know about her is that you really like her;’ a small boy wearing his crazy stripe sweater with the caption: ‘you’ve got a nephew who is already cooler than you.’

“We wanted the campaign, and the films in particular, to focus on the best part of the season – family and friends. While the Holidays look different in every home across the country, Sofia has brilliantly translated Gap’s snapshots of these authentic family characters to the screen.  Our aim was to create a campaign that would be very warm, very honest and very Gap.  And even if you don’t always get your family, our message this season is that it’s easy to give them Gap,” said Seth Farbman, Gap’s Global Chief Marketing Officer.

“Sofia is a great fashion icon and helped us bring our fashion themes to life alongside the storytelling of family fun for the festive season.  The campaign celebrates our spirited and optimistic crazy stripe collection, along with candy-colored Fair Isle sweaters, cool biker jackets and a collection of party dresses.  The Gap holiday collection is more giftable, more romantic, more optimistic, more fashionable and more Gap than ever,” said Gap Creative Director, Rebekka Bay.

“In the Fall, we started our Dress Normal story with another great director - David Fincher – and issued a rallying cry to dress how you feel most comfortable, and ‘dress like no one’s watching.’ Now Sofia Coppola has helped us bring to life the second chapter of Dress Normal through our Holiday films with the same authentic and honest tone,” said Steve Sunnucks, Gap Global President.

The films are part of Gap’s 2014 holiday campaign, which celebrates the spirit of the season through the Dress Normal lens, and will appear on innovative digital outlets, Gap’s own social media channels globally and on GapGiftGuide.com, which launches November 3. Fans can visit youtube.com/gap to watch the films in full.