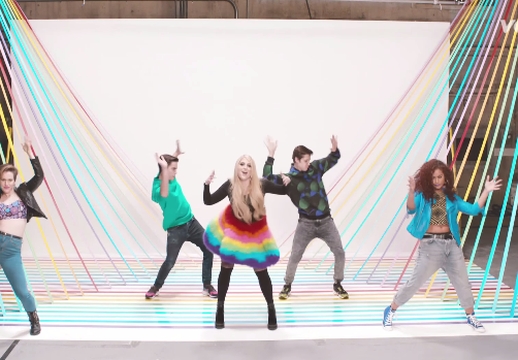 Epic Records breakout pop star Meghan Trainor has partnered up with global technology company HP and ad agency 180LA for its #BendTheRules campaign, which includes the creation of a music video for Trainor’s brand-new single “Lips Are Movin.’”. Trainor and “Lips Are Movin’” will also be featured in the global holiday campaign for the HP Pavilion x360 convertible PC.

Trainor and HP are “bending the rules” by releasing the first-ever music video created by social “influencers” — the most influential Viners, Instagrammers, and YouTube stars from around the world.

“The set of this music video looked insane, like the Internet exploded,” explains Adam Groves, creative director at 180LA. “These social influencers have a combined following upwards of 30 million so we knew that this campaign was going to be talking to a lot of people.”

“Every day we hear how social influencers are forcing us to revisit the notion of what’s possible,” says Zac Ryder, creative director at 180LA. “We loved the idea of creating something with this audience. It truly makes the possibilities for ‘firsts’ become endless.”

Trainor is no stranger to working with social media stars, having featured dancer and Viner Sione Maraschino in her video for her multi-week No. 1 single “All About That Bass,” which has racked up nearly 250 million views on VEVO.

“Lips Are Movin” follows on the heels of Trainor’s multi-platinum debut “All About That Bass,” which captured the No. 1 spot on Billboard’s Hot 100 chart for a record-breaking eight consecutive weeks. It has been certified 4x-platinum in the U.S. with more than 5.5 million sold worldwide.

The #BendTheRules holiday campaign created by 180LA and social agencies Niche and Collectively is an extension from the first TV and Vine integration with HP’s, “The Connected,” which also promoted the x360 by bending the rules of TV advertising.