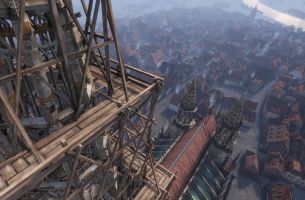 With the help of digital agency Demodern, the dream of flying becomes a reality. The experts at the Hamburg-based agency have launched a new way to discover the historical city of 1890s Ulm from a bird’s eye perspective.

The virtual reality experience was created on behalf of the Interactive Media Foundation, Berlin, and uses the robotics technology of SOMNIACS’ Birdly: A full-body flight simulator. Lying down on the machine, users embody a bird and can naturally flap their wings to fly over Ulm’s rooftops.

Demodern is responsible for the user experience, 3D-design and technical implementation of the application called ‘Ulm Stories - The View from Above’. The idea and basis concept come from the Interactive Media Foundation, which initiated the project for the city of Ulm.

Demodern modelled the entire historical city of Ulm from the ground up with their own 3D-department – staying true to scale and detail. The agency is also the first party to develop software externally for use with this particular hardware. Besides the Ulm Cathedral – depicted shortly before its completion and becoming the world’s highest church tower – striking buildings, such as the city hall and Einstein’s birthplace were also designed, modelled and textured.

"We are bringing the memories of a city destroyed during the Second World War to life – in VR," explains Demodern CEO Alexander El-Meligi as he clarifies the idea behind the application. More than 500 hours of 3D modelling in Blender and 3ds Max went into building the one square kilometre of Ulm’s cityscape, including 2,000 historic residential buildings and over 6,000 other objects such as trees, animals and bridges. The technical implementation was realised with the Unity3D game engine in real-time 3D. "With such a technically demanding project, it was a serious challenge to create an experience that stages a natural-looking city yet also guarantees a pleasant flight experience for the user. Soon, everyone can see for themselves that we succeeded," says a satisfied Alexander El-Meligi.