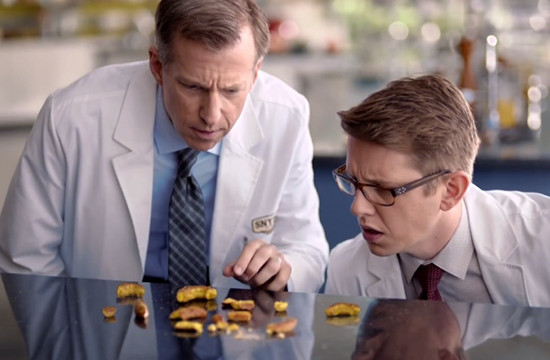 Those in search of flavored snacks need look no further — Snyder’s of Hanover pretzels is launching a television and digital campaign to show Americans how deliciously flavorful its pretzels can be.

While Snyder’s of Hanover is the top-selling hard sourdough pretzel in the U.S., many consumers have never tried the flavored pretzel varieties offered by the brand. The goal of the new campaign is to highlight Snyder’s wide assortment of pretzels, with a focus on increasing awareness of its nine varieties of Flavored Pretzel Pieces (including the new Flavor Doubles which feature complementary flavored pretzel pieces in the same bag).

“Snyder’s already dominates the category when it comes to traditional pretzel varieties, such as sourdough, so our goal was to grab the attention of those people that might not be considering pretzels as a snack,” said Brian Burkhart, Senior VP/Associate Creative Director at GKV, Agency of Record for Snyder’s of Hanover pretzels. “The creative highlights the intense, burst of bold taste of the Snyder’s of Hanover flavored pretzel pieces — something consumers don’t typically associate with a traditional sourdough pretzel.”

The TV spot portrays how two workers in the Snyder’s of Hanover Flavor Kitchen came up with the idea to add so much intense flavor to a pretzel that it had to be broken into pieces. Patsy Cline’s “Fall to Pieces” track adds a nostalgic feel to the light-hearted spot.

“Our pretzels are consistently rated number one for taste among our consumers, yet pretzels aren’t necessarily seen as a flavorful snack,” said Bob Gould, Marketing Manager for Snyder’s of Hanover. “Focusing on our Flavored Pretzel Pieces gives us a fresh way to grow the category and bring new consumers to the brand.”

Digital efforts include social media elements as well as rich media “Shake it to Break it” mobile ads, which encourage users to break up a pretzel into pieces by shaking their phone. Consumers are then invited to visit a microsite to break other items such as a vase, zombie or an electric guitar. Additional campaign elements include in-store graphics, displays and an FSI in select markets.

The campaign will launch in mid-May in 27 major markets across the country including San Diego, Phoenix, Boston, Cincinnati and Baltimore. The TV spots are airing on network affiliates during high-profile season finales of shows such as “American Idol” and “The Voice,” as well as baseball games broadcast by regional sports networks such MASN.

The creative, media and digital efforts were developed by Baltimore-based agency GKV, which also handles advertising, public relations, and media planning and buying for Snyder’s-Lance at the corporate level as well as for Snyder’s-Lance brands, Lance Sandwich Crackers and Cape Cod Potato Chips.