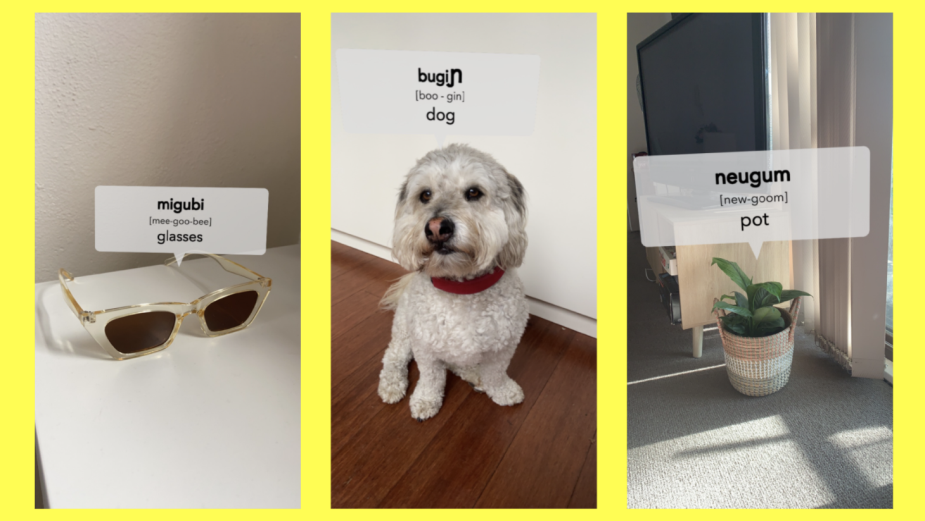 In celebration of International Mother Language Day on February 21st, Snapchat has partnered with First Languages Australia to launch a series of language learning Lenses that help raise awareness and educate young Aussies on Australia’s first languages and Indigenous culture.

The Lenses are accessible globally via Snapchat from today, by searching “Learn Wiradjuri”, “Learn Yugambeh”, “Learn Wakka Wakka” or “Learn Yawuru”, or scanning the Snapcodes below. Snapchatters just have to point their cameras at an object to scan it, and the Lens automatically displays the object’s English and Indigenous language names in real time, along with an audible clip of the word to help with pronunciation. Snapchatters will also be able to swipe up to learn more about these languages from the First Languages Australia website.

First Languages Australia’s CEO, Beau Willaims, commented: “It is so important that we continue to support and promote the languages of Aboriginal and Torres Strait Islander people. We know millions of young Aussies use Snapchat everyday – so this is an incredible opportunity for them to experience our First Nations’ languages in a fun and interactive way on a platform that they love. This project will boost recognition of our languages globally and will support our grassroots programs and help to engage our young people.”

Snap’s General Manager for APAC, Kathryn Carter, commented: “We’re thrilled to collaborate with First Languages Australia, and hope these Lenses represent our small part in supporting Australia’s Aborigibal and Torres Strait Islander communities in a unique way. We believe the camera is a powerful tool for discovery and learning, and these lenses are such a great example of that. The history, culture and languages of our Indigenous people is rich, diverse and meaningful – it’s so important that we honour and share them with the next generation of young Australians.”

Wakka Wakka descendant and First Languages Australia Young Champion, Annalee Pope, adds: “We are so proud of our heritage and hope that the Wakka Wakka language will live on for future generations. My hope is that being able to see and share their language through Snapchat will encourage our people and others to learn more and give them an opportunity to share their language and culture with their friends, family and community.”

Yugambeh descendant and First Languages Australia Young Champion, Shaun Davies, adds: “In the old days, our Elders taught lingo by the campfire. But the camp has changed, and the fire that people stare every day at is not the same. Technology has become a central place in the home and now our lingo needs to go there if it is to survive for mobo jahjum (future generations).”

Yawuru descendant and First Languages Australia Young Champion, Isobel Varney, adds: “Technology is a huge part of this world and it’s developing rapidly. As a young person, I can see the huge influence social media and communication apps have on young people. They allow us to connect in new and interesting ways and give us the opportunity to share and learn in a digital word. It’s exciting to see Snapchat embrace our youth and give them the chance to help others to learn their own or others’ languages.”

Wiradjuri descendant and First Languages Australia Director, Geoff Anderson, adds: “The more people that are aware of our Wiradjuri languages and others the better. Having our languages on Snapchat is such an amazing opportunity to enhance the knowledge of our language. Being able to scan objects and see our word for it will hopefully encourage people to use it in their everyday lives.”