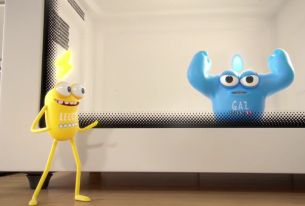 Smart Energy GB, the voice of the smart meter rollout, will this week unleash Gaz & Leccy onto Britain's small screens for the first time. The campaign will bring to life the reality that, without smart meters, our gas and electricity is out of control.

The 60 second Gaz & Leccy advert will be premiering on television screens on this evening, with headline slots during Euro 2016, Germany v Poland (ITV) and Kirstie and Phil’s Love It or List It (Channel 4).

In a nod to cartoon rivalries such as Tom and Jerry, the advert sees Gaz & Leccy trying to get one up on each other. The twosome cause mayhem with some familiar household appliances, from whizzing round a whisk to tomfoolery with a TV and toaster. The final frame pulls out to reveal that Gaz & Leccy are out of control, not just in one home, but in thousands across Great Britain. The voiceover lands the campaign messaging; ‘Let’s get Gaz & Leccy under control. Smart meters are here’. It also drives the consumer to smartenergyGB.org or a local Post Office branch for more information.

The Gaz & Leccy campaign will also be appearing in a takeover of the Metro newspaper, as well as featuring in other national publications, national radio and owned social channels from Friday 17th June.

The week commencing Monday 20th June will see two new 30 second adverts going live across television, VOD and mobile video channels. This will be backed up by a special 3D 30 second film in cinemas, mixed in Dolby 3D.

Smart Energy GB is running one of the biggest behaviour change campaigns of our generation. Its task is to engage every household in England, Scotland and Wales to upgrade to smart meters and use the new technology in their homes.

Smart meters are the solution that will help Great Britain get Gaz & Leccy under control. By providing near real time information on what we’re spending on gas and electricity, smart meters provide accurate bills and bring an end to estimated bills. Between now and 2020, every household across England, Wales and Scotland will be offered an upgrade by their energy supplier at no additional cost. More than three million smart meters have already been installed across Great Britain.

The television campaign isn’t the first time Gaz & Leccy have caused mischief. The campaign has already appeared in regional, digital and outdoor advertising, as well as cinemas. The award-winning Gaz & Leccy cinema takeover film shows an unsuspecting cinema audience getting the shock of their lives as the advert comes to “life” in a fully immersive, 4D live experience. The cinema takeover clocked five million views in just four weeks.

Gavin Sheppard, Director of Marketing at Smart Energy GB, said: “We’re well aware that energy is an ultra-low interest category for consumers. To capture the imagination of every household in Britain, we asked AMV and Picasso to push the boundaries and create something truly memorable; something that would resonate with the feelings consumers tell us they have of energy being out of control in their homes. I think in Gaz & Leccy they’ve done this brilliantly. We’ve had such an incredible response to Gaz & Leccy online, on radio and in out of home and I am really excited to see them finally come to life and bring their unique flavour of mayhem to our TV screens this summer and beyond.”

Melissa Venet, Producer at Picasso Pictures, the animation studio that brought Gaz & Leccy to life in 3D, said: “Working on bespoke rigs, models, textures, animation and lighting over five months of production has meant we have created something very special. We wanted to bring a level of quality you would expect to see in a feature film, and we definitely feel the hard work paid off.”