Behind the Work
3.5k 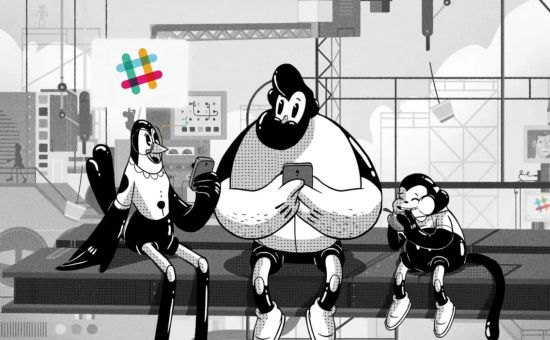 The first, ‘Spaceship!’, is a tech-infused twist on early 20th century rubber hose animation and was created by Canadian production company Giant Ant.

The story was devised as a collaborative process between Giant Ant and the team at Slack, Giant Ant partner and creative director Jay Grandin explains.: “When we were first briefed on the project we were invited to pitch story ideas, but were also given a handful of optional starting points from the Slack team: one was the song, one was the idea of a 20's style animation, and one was the idea of building a spaceship. After throwing some other ideas around, we decided that the wacky kit of parts we were provided could make for a really interesting starting point, so we worked with Stewart & Bill (CEO & CMO) at Slack to flesh the story out.”

The distinctive look of the spot combines 3D animation with traditional character animation, and stylistically borrows from the wibbly-wobbly cartoons of the 1920s – with a contemporary spin, of course. According to Jay, this visual mashup was driven by a desire to create an ‘ownable look for slack’.

“We didn't want to just fake a 20's animation, and saw an opportunity to combine techniques to give the old-time vibe a modern wink,” he says. “As we dug deeper, we started to like how the combination of styles echoed the product in an interesting way: Slack is a modern tool to help teams communicate in as honest and natural way as possible which, in concept, has an old-time sensibility to it—despite being wrapped in a layer of technology.”

The team did have plenty of fun, though, indulging in their love of the ‘cartoony’ side of animation. As soon as the Slack team mentioned the rough idea of pairing themselves with something like Steamboat Willie, Giant Ant jumped at the chance to go ‘full rubber hose’.

While Giant Ant were developing their Spaceship! Animation, over in London, Nexus was busy creating a very different kind of animation for Slack. Their ‘Animals!’ spot is a blend of CG and live action that re-imagines the office as a menagerie, full of very different beasts working together to get the job done.

'Animals!' Was directed by none other than Smith & Foulkes and the agency involved was TBWA\Chiat\Day. The spot was shot on location in East London and human actors were used as stand-ins for their animated counterparts, in order to capture believable gestures.

The films were created concurrently, and when the team at Giant Ant heard about the ‘Animals!’ project at Nexus, they decided to tweak their approach in order to ensure more creative cohesion between the two.

“The characters went through a few iterations, but it happened in a short amount of time. Our first rounds were more overtly humanoid, and astronaut-like. As we caught wind of the other spot in the Amazing series that Nexus completed, we shifted to animal heads to create a link between the spots,” says Jay. “The characters themselves each have a distinct personality that relate loosely to different types of team members. We have our big muscular work horse who's just happy to get things done. There's our cerebral bird character who is focused on detail work. We've got our alpha female, who is the most vocal and acts as a leader for the team. And then there's our little hungry monkey boy who means well, but isn't a particularly effective collaborator.”

Both TVCs are whimsical and playful – reflecting Slack’s positioning as a product that promises to make work more enjoyable and (dare we say it?) fun. They’re bound to play well with both the creative industries, which has already embraced Slack, as well as wider audiences.