Sky & Pixar Team Up for ‘Toy Story of Terror’ 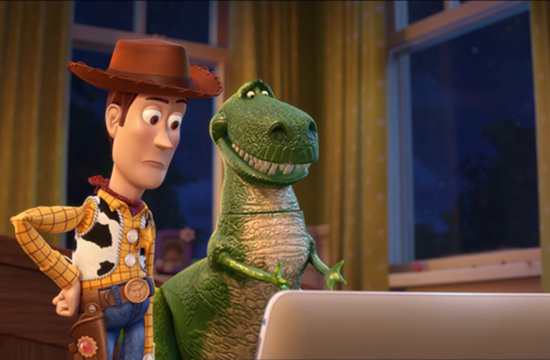 Sky has teamed up with  Disney Pixar to create a brand new TV ad featuring characters from the popular Disney Pixar’s Toy Story movie franchise to promote its superfast fibre broadband service and celebrate the arrival of the all-new 30-minute Toy Story OF TERROR! TV special, which will premiere in the UK & Ireland on Sky Movies Disney in October.

During the specially-created 50 second animated advert - which premieres today across Sky and terrestrial networks - Buzz, Woody, Jesse and the other Toy Story characters are seen struggling to get online because of their current broadband provider, which eventually explodes when pushed too far. Luckily, the Toy Story aliens come to the rescue. Sky Fibre is the solution to their problems, fast enough to keep super busy homes super happy.

From Disney Pixar comes a spooky new tale featuring all of the favourite Toy Story characters.  What starts out as a fun road trip for the “Toy Story” gang takes an unexpected turn for the worse when the trip detours to a roadside motel.  After one of the toys goes missing, the others find themselves caught up in a mysterious sequence of events that must be solved before they all suffer the same fate in this “Toy Story OF TERROR!”

Sky Fibre has no usage caps or traffic management, letting people download or stream as much content as they like, making it ideal for those homes where multiple devices are connected to the internet at the same time. Sky Fibre Unlimited is currently available for just £10 a month for six months, plus Sky line rental.  After the introductory period, the monthly price is £20.

The launch of the campaign builds on Sky’s on-going collaboration with Disney and follows the successful launch earlier this year of Sky Movies Disney HD. The launch of the brand new channel marked the first time Disney had been involved in launching a co-branded linear movie channel anywhere in the world.

Lyssa McGowan, Director, Sky Broadband, comments: “Following the explosion in the use of internet-connected devices in the home, more and more households find that they all want to get online at the same time. Sky Fibre provides the perfect solution, delivering a superfast service that meets the demands of busy homes. This is brilliantly brought to life by the Toy Story characters in this funny and beautifully-crafted campaign.’

The TV ad was a collaborative effort between Pixar Animation Studios, and Disney working alongside WCRS and Sky. The campaign will also feature in print media and on posters across the UK.