Sky Partners with WWF Ahead of Earth Hour 2016 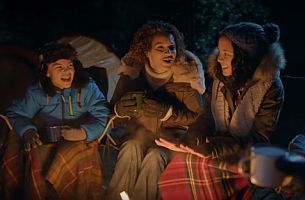 In support of this year’s Earth Hour on March 19th, Sky has once again partnered with WWF to help inspire its customers to take action on climate change, creating an inspiring new promo advert and dedicated environment themed programming complete with a social media campaign #SkyandWWF and new microsite.

Building on Sky Rainforest Rescue, Sky’s partnership with WWF that helped save one billion tress in the Amazon, for Earth Hour Sky are encouraging its 21 million customers across Europe to take part in WWF’s annual global celebration where people switch off their lights for one hour, as a symbolic act to show they care about the future of our planet.

Over the last decade, WWF’s Earth Hour’s unique display of darkness has become a global phenomenon uniting hundreds of millions of individuals across the world. In 2015, over 10 million individuals in the UK joined forces with a record-breaking 172 countries and territories to create a symbolic moment and put the spotlight on issues affecting our planet. This year over 350 global landmarks in 178 countries and territories will switch off their lights including Big Ben and the Palace of Westminster, the Eiffel Tower, Empire State Building, Sydney Opera House and Burj Kalifa.

In addition to Sky’s own internal and operational commitments, including turning out all non-essential lighting at key campuses and encouraging its 30,000 members of staff to get involved, Sky will be engaging its customers by showcasing the beauty of the natural world  through a line-up of environment themed programming.

Sky will bring Earth Hour into people’s homes with a hand-picked collection of programmes, including Sir David Attenborough’s Conquest of the Skies and Richard Hammond’s Jungle Quest, on Sky 1, Sky Movies and showing on demand.

On the night, Sky’s offices will be turning out all the lights they don’t need, joining iconic landmarks in each country, including The Shard in London, St. Peter’s Basilica in Rome and the Brandenburg Gate in Berlin.

Glyn Davies, Acting CEO of WWF-UK said: “WWF have had a long and successful partnership with Sky through Sky Rainforest Rescue. Bringing the important Earth Hour message to all of Sky’s customers across Europe will greatly extend the impact of our campaign, reminding people of the importance of taking action to protect our planet from the effects of climate change.”

Lucy Carver, Director, Bigger Picture, Sky UK said: “Over the years our customers have shown that they really care about protecting our beautiful planet. We had a great response when we went carbon neutral 10 years ago and through Sky Rainforest Rescue they helped raise over £9 million. Now we’re excited to be encouraging our customers to join us in supporting this year’s Earth Hour.”

Everyone can join the celebration for WWF’s Earth Hour at 8.30pm on Saturday 19 March 2016. For more information and to sign up visit wwf.org.uk/earthhour