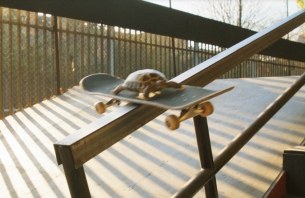 Virgin Money will on Saturday 18th April air the second TV ad in its new campaign, following on from ‘Pigeon’, which showed a pigeon dancing to The Selecter’s ‘On My Radio’.

The new spot shows a tortoise crawling onto a skateboard beneath a ‘There’s Money’ super – before it then embarks on a wild skateboarding sequence to the sound of The Hives’ ‘Tick Tick Boom’, when the ‘and there’s Virgin Money’ super appears.

Alongside ‘Pigeon’, ‘Tortoise’ aims to mark Virgin Money out as a bank unlike all others – celebrating its brand differences and representing the bank as a better, bolder way for customers to manage their finances.

The campaign was created by m/SIX, with cross-discipline support from across The&Partership. Both ‘Pigeon’ and ‘Tortoise’ were directed by Andy McLeod through Rattling Stick.

The campaign is also supported by a series of press ads, showing a squirrel in a super-hero cape, a goat with a moustache, a guide dog with an Elvis quiff and a sloth lounging in an armchair – contrasting them with their more ordinary counterparts. With photography from Tim Flach, these print executions highlight the difference Virgin Money makes across its product range and Virgin Money Lounge offerings.

Commenting on the launch of the campaign on April 6th, Paul Lloyd, Marketing Director at Virgin Money, said: “The strategy with this campaign was to celebrate the Virgin Money difference and to bring it to life in a fresh, fun and surprising way. The TV and print work created by m/SIX marks us out as a bank with a difference – and above all, reflects our values as a confident challenger brand.”

Jess Burley, CEO of m/SIX, said: “This has been a fantastic campaign to work on – with m/SIX leading the charge on a cross-discipline brief including audience and category research, creative content generation and ambitious production. The result is a suitably epic strategy spanning multiple channels and disciplines which we’re confident will really set Virgin Money apart at this exciting point in its journey as a business.”