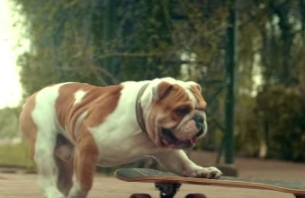 The new Mizuno Wave Creation 17 campaign by F/Nazca Saatchi & Saatchi highlights the best of what the Runderful concept has become synonymous for: technology, comfort and design. The campaign includes film, outdoor and printed media advertisements, as well as a hotsite. All messaging reinforces the ‘It’s Runderful’ concept, launched at the beginning of this year with the debut films ‘Traffic Signs and ‘Stroller’, and introduce the new addition to the brand’s collection for the second half of 2015.

The film is titled ‘Skateboard’, which focuses on running as a sport which provides enjoyable and pleasant experiences. The film’s protagonist is an accomplished runner using the brand’s new model, the Wave Creation 17, on a run with his bulldog who needs to ride a skateboard in order to keep up with his owner.

All pieces reinforce the fun side of running while highlighting the Wave Creation 17’s key features: maximum comfort and cushioning.