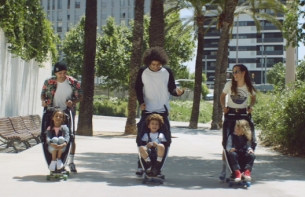 Following his number one with Duke Dumont on ‘I Got U’, record label Blasé Boys Club today release the promo for Jax Jones’ new track ‘Yeah Yeah Yeah’.  Directed by Scott Altman from Defunct, the promo was shot in Madrid and shows children having fun in longboard buggies.

Scott says: "The brief for 'Yeah Yeah Yeah' really appealed to me as the label was after something ‘quirky’ that was in a similar vein to previous Duke Dumont videos.  With that in mind I saw the project as a perfect opportunity to push the brief and go for a concept, with a subtle narrative, that was ultimately original and ideally hadn't been filmed before.”

He adds: “With a background in skateboarding I thought it would be pretty cool to have a few radical parents take to the streets, with their kids in these longboard buggies and perform skate tricks, and routines to the track.  I always knew the idea was going to be a huge challenge; we had the boards custom made and dummies created - to double up as the kids - so more extreme tricks could be performed, and a great team in the UK & Spain to make it all become a reality."

Graded at ENVY, Colourist Danny Wood says: “It was a very nice project to grade; Scott has a great attention to detail.  We wanted the grade to give the promo a Californian summer feel while keeping it quite fresh. In Flame, Kieran Baxter added lens flares to enhance the sunny scenes and also ramped the footage to help merge the track with the visuals.”