Awards and Events 415 Add to collection 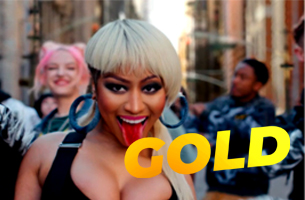 Amsterdam and Berlin based music agency Sizzer has struck gold at the Eurobest awards. Their take on classic 'I Wanna Be Loved By You' for Diesel's controversial 'Hate Couture' campaign took home the top prize in for 'Best Use of Licensed or Adapted Music' in the Film Craft category.

Diesel's latest campaign takes a stand against online abuse, which sees polarising celebrities literally wear the worst comments they have ever received. Nicki Minaj and the other stars of the campaign turn hate on its head, bringing to life the tagline 'The more hate you wear, the less you care'.

This film is much more than a fashion film. It creates a lasting cultural impact by literally spinning the language of abusers into words that can empower. Obviously, 'I Wanna be Loved by You' is a tongue-in-cheek, ironic take on the central premise of the campaign - it's not about being loved, it's about turning hate against the perpetrators. Just like the song's most famous performer, Marilyn Monroe, did in her time. Sizzer gave the classic song a Calypso twist, celebrating - to an extreme - the liberation of acceptance.