An extension of Myer's latest activation in the Sydney CBD via IdeaWorks. 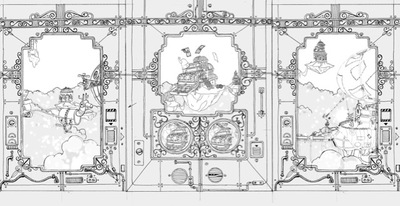 Sydney animation house Sixty40 director Kyra Bartley was recently approached by IdeaWorks to create a whimsical animated installation experience for Myer as part of its newly launched Wonderland by Myer, a magical retail destination for the entire family. To carry people from the ground floor up to the Wonderland level, Bartley was asked to re-imagine the department store's lift journey as a rocket ship ride, transporting passengers from the Sydney CBD, up through the clouds, and into the illustrative, steampunk-inspired Wonderland by Myer level. VIEW THE FILMS

Designed to whet peoples' appetites for Wonderland by Myer, offering them a taste of the characters and style of environment awaiting them, Bartley and her global team of artists (based in Sydney, Paris, Columbia and Phnom Penh) set about creating a series of experiential animated films for the lift that brought to life the

hand-illustrated world of Wonderland.To ensure the lift experience complemented the overall Wonderland by Myer fit out, Bartley took her lead from the illustrations created by Dean Mortensen and imagined how they could be brought to life as animations, adding charming characters, ships and details to flesh out the immersive world that covers a 270 degree view from the lift.Says Bartley: "We wanted to populate our lift world with quirky elements that would really draw people into the space. There's so much intricately drawn detail included that you'd be hard pressed seeing every detail, meaning no ride is ever the same, giving passengers a new experience each and every time."Says Simon Robson, creative director, Sixty40: "As soon as we took the brief it was immediately apparent that it was a quintessential Kyra Bartley job... knowing her well and her love for the detailed and eccentric, I had no doubt that she would excel on the treatment and give the job every minute she could."For the Myer rocket ship lift, IdeaWorks creative director James Griffiths says he wanted to create a grand entrance to the Wonderland by Myer above the clouds, and with the help of Sixty40 and Bartley, believes something truly special was created.  Says Griffiths: "From the moment you step in and are greeted by our little critter, you are transported to a retail entrance like nothing else on Earth and really feel like you are being rocketed to another world. It has been a pleasure to work alongside Kyra and the Sixty40 team and craft new ways to tell our Wonderland story." Client: MyerAgency: IdeaWorks SydneyCreative Director: James GriffithsCopy Lead: Jen DobbieArt Lead: Tom DentonIllustrator, Scenes by Dean, Dean MortensenContent Producer: Jay JenkinsManaging Director: Danny LattoufProduction Company: Sixty40Director: Kyra BartleyECD: Simon RobsonExecutive Producer Sixty40: Will AlexanderExecutive Producer Heckler: Bonnie LawProducer: Charu MenonIllustration:Juan Andrés CastañedaFred VenetMatt HeathTess Simpson2D Animation:Aurélien RessencourtPaul McNultyJo Fong3D Animation:Max McMullinAdrien GiraultLuke CarvellMarco ChauCompositing:Bertrand PolkaFerry TaswinChuong VuShane MirandaBTS Camera:Charu MenonDavid CollinsBTS Edit:Mark DedajClement Bouchet
view more - Creative