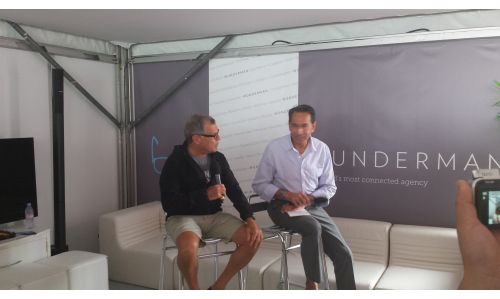 Fresh from a trip to Brazil – coincidentally timed for the kick off of the World Cup – Sir Martin Sorrell took to the stage at Wunderman’s beachside cabana in Cannes to share his views on the state of the industry.

Swapping his usual suit for a Cannes casual shorts-and-hoodie combo, Sir Martin was on relaxed and jovial form as he spoke to the assembled audience. In a wide-ranging conversation that covered everything from the under-representation of women in advertising to WPP’s close but competitive relationship with Google, Sir Martin opened with the ever-growing prominence of data-driven advertising and the industry’s reluctance to embrace it as a creative tool.

“One of the problems with Cannes, certainly up until a few years ago, and certainly with our industry as a whole is that creativity has been defined very narrowly and creativity can be applied to anybody. As an ex CFO I can tell you that CFOs can be creative… sometimes too creative! Creativity is a relative term and it applies to every aspect of our activity,” he said, praising Cannes Lions’ introduction of a data visualisation category. “I don’t think Cannes, forgive me for saying this, has shifted far enough. It’s still rooted in the past but it is much more diverse in many senses.”

He also talked at length about his evolving relationship with Google, while putting to bed rumours that he was responsible for coining the phrase ‘frienemy’, which he has frequently used to describe the digital giant.

They’ve got excellent people, first class. They’ve lost a lot of people to other operations, whether it be Facebook or Twitter, but their bench strength is very strong. They have a very strong planning process… and they are our biggest media relationship so you can’t naysayo r gainsay their planning pocess, quarterly reporting, depth and strength of talent. So I have these conversations with them then go to India or Brazil – I was in Brazil last week, coincidentally I have to say – and they  [agency figures] say, ‘Martin you don’t know what you’re talking about. They’re out to steal our lunch’. I got an immediate response from Google saying ‘we’re very disppointed to hear you say that because that’s not our intention or our objective. If you hear of any examples of Google going direct to your clients, tell me and I will deal with it’,” he revealed. “That was at a very senior level and I take them at their word so I will say they are a friendlier frienemy today than they were when that phrase was coined.”

The growing importance of Google as a media partner and WPP’s increasing involvement in content creation for the likes of Netflix also had Sir Martin pondering the disconnect between media spend and media engagement. Traditional legacy newspapers and magazines still claim a higher percentage of spend compared to the amount of time people spend reading them, while digital and mobile spend has yet to reach a level commensurate with the time people spend online and on devices. He also predicted that TV, which has remained relatively strong over the past few years, is set for a decline. He

“It’s a bit harsh to say but [during a recession] people spend more time at home. You see that with food you see that with couch potatoes sitting watching TV; television hours have stayed remarkably strong, however I think over time it will start to change,” he predicted.

The conversation also covered post-Snowden implications for data protection and online privacy, which he acknowledged has resulted in tricky terrain for the industry to navigate, particularly as ‘opt-in’ approaches to privacy begin to take prominence over the traditional ‘opt-out’ stance.

“It’s very difficult because when you have events like Snowden and the NSA, whatever the rights and wrongs, whether Snowden is a hero or a traitor, it’s very, very difficult. We were going down the ‘opt out’ tract…now opt in is more the flavour du jour and it’s very difficult to argue against that although there are ways and approaches,” he said, warning that the industry would have to find a way to communicate clearly and fairly with consumers and offer some real, tangible benefits for sharing their online data.

Sir Martin rounded the conversation off by touching on the recent collapse of the Publicis-Omnicom merger – a topic he approached with great relish, cheekily pondering whether the whole idea had been the result of a drunken Cannes encounter. “The idea that Publicis and Omnicom would get together is an idea that I found unfathomable within hours of the announcement. It just didn’t make sense. It may have sounded like ‘I told you so’, but at least I’ve been remarkably consistent,” he said.

However, the failure of Publicis and Omnicom has not dented WPP’s continued acquisitions. “The fact that that has happened has no implications whatsoever for acquisition activity. There’s no such thing as mergers, there are only acqusitions as that shows. The whole concept of a merger of equals is not fatally flawed because Publicis and Omnicom tried to do it, it’s fatally flawed as an idea.”