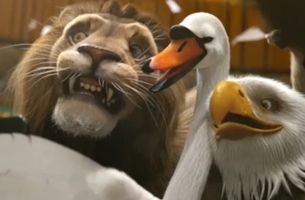 Michelle Rodriguez has joined Liam Neeson as a voice in the first ever global cinema ad titled '#WEHAVEAPLAN Tell Everyone' , with the ad appearing on thousands of Cinemas around the world from the 25th September.

Featuring world class animation from Aardman and creative lead by legendary ad man, Sir John Hegarty, the film has a soundtrack which has been written and produced by Peter Gabriel. The ad has been mixed in DOLBY 5.1 & DOLBY ATMOS immersive sound technology and mastered and distributed globally by UNIQUE DIGITAL.

SAWA Global Cinema Advertising Association are founding partners in the initiative surrounding the Global Goals, the brainchild of Film Maker and Humanitarian Richard Curtis. Through its network of Global Cinema Advertising Companies SAWA are launching the ‘First Ever Global Cinema Ad’ in over 30 countries, utilising the power of Cinema to engage the global Cinema Cinemagoers will be able to interact with the Cinema ad via the Global Goals app created by CINIME International. The app allows audiences to unlock content, which is exclusive to Cinemas, and share the Global Goals through their social media The Global Goals campaign founded by film director Richard Curtis was announced earlier this month with a bid to reach 7 billion people in 7 days with news of the United Nations Global Goals for Sustainable Development. This unprecedented effort will culminate on the 25th September at the UN when 193 world leaders will adopt the Global Goals, a series of 17 ambitious targets to end poverty, fight inequality & injustice and tackle climate change for everyone by 2030. If the goals are famous - if people care about what has been promised by the politicians, it greatly increases their chance of being implemented.