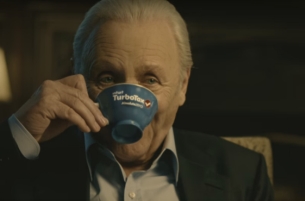 If you caught the Big Game, then you know that TurboTax hired Sir Anthony Hopkins to help sell absolutely nothing in the commercial “Never a Sellout”, from W+K Portland.

For the second year in a row, TurboTax used one of the nation’s biggest broadcast moments to build awareness for Absolute Zero, its best free tax-filing offer ever. It’s the kind of product a celebrity concerned about selling out would be fine with because, really, they’re not selling anything.

This concept hinged on landing an actor who had never done a commercial in the U.S. and would be a surprise to people watching. Iconic and award-winning actor Sir Anthony Hopkins fit the bill. He is, after all, one of Hollywood’s few actors with far too much integrity to sell anyone anything.

Sir Anthony Hopkins continues to not sell you anything in additional interview segments discussing his career.