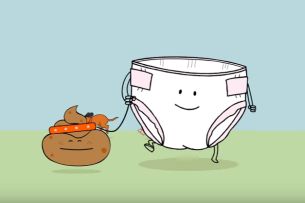 Docusol, the children’s constipation relief brand, has launched a new animated film featuring a singing and guitar-playing nappy, as part of its “Make A Nappy Happy” campaign.

The online film, promoting Docusol Paediatric Solution for babies and created by McCann HumanCare, tells the story of an unhappy nappy who dreams of one day being filled.

The film is launching on YouTube and is also running on the newly created Docusol website, created by McCann HumanCare, and will be seeded to mums with young children through a targeted media campaign which will launch within the next month.

In the film, the nappy plays guitar with a band of children’s toys and sings: “You for me and me for you, I want you to be my number two …” In the end, the nappy meets her match with a little poop, and the two of them walk off happily into the sunset together.

McCann HumanCare worked with the music agency Cord to create the catchy tune sung by the nappy in the video.

The animation is the latest iteration in the brand’s “Make A Nappy Happy” campaign, also created by McCann HumanCare, which launched earlier this year. The campaign also features online banners, press ads, and a mobile game which sits on the Docusol website.

“Make A Nappy Happy” is designed to flout the conventions of UK health advertising aimed at mums by injecting humour and lightheartedness into the messaging.

Docusol Paediatric Solution is an over-the-counter constipation relief formula for babies as young as six months. “Make A Nappy Happy” is the first major advertising campaign for the brand.

Kylie Hart, Marketing Executive for Docusol owner Typharm, said: “McCann HumanCare have been a major part of launching our first consumer campaign and have helped us to achieve growth to a new brand. They understand the critical elements of brand insight and the importance of putting the consumer at the centre.

“With the launch of the “Make a Nappy Happy” campaign we can see how McCann’s work has influenced major retailers and helped to educate healthcare professional and consumers. They’re smart people creating smart work.”