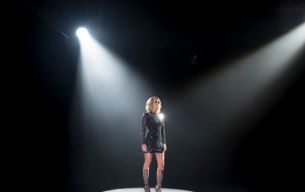 Underwood guides viewers on a behind-the-scenes tour of SNF, making her way through the VIP entrance, locker rooms, press box, the stadium, and onto the field, playfully interacting with the players, cheerleaders, and fans. She ends her powerhouse mobile performance exiting the bright stadium, finishing to thunderous applause.

Dixon, Geffen and Reid began collaborating at a very early stage, fleshing out the idea of a 'one take' open and steering away from the concert-style performance of prior SNF opens, instead creating an engaging production with the Grammy Award-winning country star. This approach called for a heightened attention to detail in pre-production, ensuring that every single beat of the :90 piece was meticulously mapped out and that talent timing was impeccably calculated. Though a true single shot approach was unattainable, they strove to not break the film whenever possible, calling for an ambitious shoot with an unprecedented number of moving parts—both literally and virtually.

Notes Geffen, “The new song brought a fresh energy and re-invigorated us creatively to come up with a new approach.”

To allow for more creative freedom, the team shot on a sound stage instead of a stadium, which upped the ante on the level of visual effects that would be required. BODEGA tapped Toronto-based feature film VFX studio SOHO VFX, who have been the team behind such recent effects-driven films as The Revenant, Avengers: Age of Ultron and Divergent, to bring their photoreal work to the table. The open called for an extensive amount of set extension work, including crafting entirely CG environments for the stadium, locker room, and stairwell, as well as creating a largely CG crowd.

The 'one shot' approach with hidden edits allowed the creative team to conceive, shoot and edit with the potential of using different players for each week of the open, depending on the match up. “Each vignette took a modular approach—one week you might see the Seattle Seahawks getting ready for a matchup whereas the next week you’d see the Cardinals. So the first week you’d see Odell Beckham Jr. making a one-handed catch and the next you’d see Von Miller doing his sideline warmups,” notes BODEGA Executive Producer Kristopher Walter.

Adds NBC Sports VP Creative Director/Director Tripp Dixon, “It was great to work with BODEGA again on the Sunday Night Football open. They were highly collaborative and committed to the project. BODEGA’s talent and teamwork, combined with SOHO’s strong visual effects capabilities, enabled us to take a fresh and dynamic visual approach to the new opening theme song.”