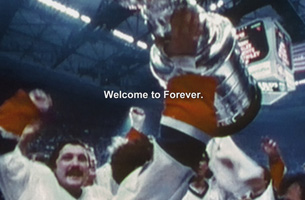 Last night at the official ceremony for the third annual CLIO Sports Awards, the National Hockey League and agency Baby Bear's Porridge Productions were honoured with the Silver award in the Commercials category for the 2015 Stanley Cup Final national spot entitled "Name."

The spot, which also recently won top AICE Award honours in the Broadcast Promotion category, was edited by Steve Bell of Cutters Studios in New York, which also provided audio and finishing services for the project. Over the past several years, Bell has been a key team member behind numerous classic NHL campaigns promoting the Stanley Cup Playoffs, including the iconic "History Will Be Made" campaign, "Cup Raise," "Boys" and "No Words." Describing "Name," Fast Company magazine staff editor Jeff Beer wrote, "The spot shows how the Cup can make a name go from what someone is called to how someone is remembered in history."

In Bell's words, "It's especially great to see Name doing so well and getting such nice recognition, because it represents the collaboration of a relatively small group of people with the same clear goal: We all wanted to do something with gravitas that drew on the long, storied history of a truly great sports league. For those of us involved, it felt personal."

Continuing, Bell explained, "The guys at Baby Bear's came up with a beautiful concept and script, and the NHL gave us terrific footage from every era to work with. For me it was a blast bringing it together and making it play the way they wanted it to. The work is dignified and restrained, but with it, you really do have an opportunity to indulge in all that emotion - and, of course, in Liev Schreiber's amazing voice - and make it as meaningful as it can be."

Bell's latest project is the 3:30 "Here I Am" brand film for JCPenney via agency mcgarrybowen and director Tucker Walsh of m ss ng p eces. Since debuting in mid-June, that high-profile project is currently averaging over 100,000 views per day on YouTube.

After commenting on the amazing job done by Walsh on the new JCPenney work, Bell added, "The most gratifying thing about ‘Here I Am' was hearing that the incredible 'Influencers' featured in the film were happy with the way it turned out. It really is all about them, their success, and their world view, so I'm thrilled to think that the film got it right and does them proud."
To view the latest work from Bell and other Cutters Studios artists, please click here.
video
Silver CLIO Sports Award Goes to NHL "Name" Spot Edited by Steve Bell of Cutters
view more - Awards and Events