Silence is Goldblum in New Menulog Campaign from Y&R Sydney 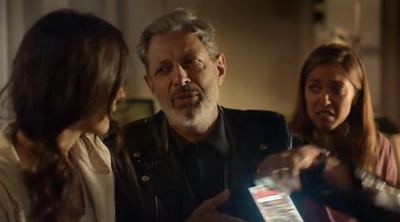 The project sees the Hollywood superstar step into a new role as brand ambassador for Australia's leading food delivery service, with a range of content designed to intrigue and interest customers - including his initial stunt in a Sydney food-truck, delivering snags for experience.

Known for his love of good food and quirky humour, Goldblum was a natural fit to front the campaign, which saw him on sunny Sydney shores filming short form content for for broadcast and digital channels. Goldblum found himself in a range of comedic scenarios where he urged Australians to have 'less talk' and 'more eat', but putting down

Says Tasman Page, head of marketing, Menulog: "We're so proud of this campaign and we think it's something that will really resonate with Australians. We've all experienced the pain of trying to order something over the phone and yet only 20 percent of us order

online. We wanted to create a campaign that spoke to this issue in a really humorous and memorable way, and Jeff certainly helped us do that.

"Jeff's personality, in his unique sense of humour and openness, really allowed us to push the boundaries across all creative elements. His star status in everyday Aussie situations is a hilarious moment in itself, but when you add in the ingenious concepts from the team at Y&R you have a really exciting campaign.

Says David Joubert, ECD, Y&R: 'We worked around the clock since winning the business back in March, to secure two very talented professionals, in Director Jeff Low and Jeff Goldblum. We always knew that together, they would help us create a conspicuous campaign, that would capture Australia's attention and work its pants off for our client."

Rolling out nationally over the next three months, Goldblum will be showing Aussies all the different ways they can make their lives easier - and their mealtimes better - with discounts, freebies and more great stuff from Menulog. The first two TVCs are on screens now, with the next three to launch in the coming weeks. Aussies will also be treated to the unscripted musical stylings of Goldblum in the radio advertising, which is on air now.