'Side by Side' Campaign Brings South American Soccer Rivals Together 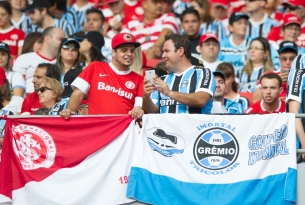 Brazil is the country of soccer, and with the passion of one of the world’s largest legion of sports fans, comes rivalry. Unfortunately, in Brazil, many games end in violence. So to suggest a change in the supporters behavior, Sport Club Internacional, south of Brazil’s biggest club, launched the campaign entitled “Side by Side”, that promoted a joint crowd in one of the most important soccer derbies of all times: Internacional versus Grêmio, one of the 3 biggest derbies of South America, among the Argentinian derby Boca Juniors vs River Plate, and the Uruguayan derby Peñarol vs Nacional.

With the challenge of bringing families back to stadiums, the campaign “Side by Side” proposed an unexpected invitation to the supporting partners of Sport Club Internacional: to watch a highly anticipated match of the Campeonato Gaúcho in March. To get in, they’d have to invite a Grêmio supporter to sit beside them. But, before that, the rival supporters would have to go through the Goal’s Way, a kilometer long walk to get to the stadium. In less than 48 hours, 2 thousand seats to the game were sold. Through this, Sport Club Internacional showed that watching a soccer match can be safe for everyone.

“Our goal was to surpass the stadium barriers and bring back the origin of the sport, that has had in its essence the gathering of people in a healthy environment. Sport Club Internacional's campaign restated the coexistence and tolerance message for everyone around the world. We realized the success of the campaign, mainly, with the increased number of kids in the following games,” states Alexandre Silveira de Lima, Sport Club Internacional Vice President.