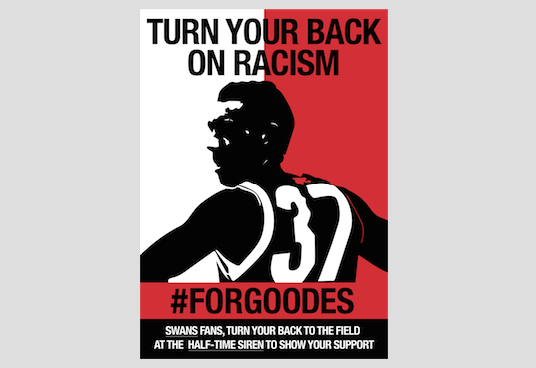 Tomorrow 303Lowe Sydney will be endeavouring to have Swans supporters stand up at half time, on the sound of the hooter, and turn their back on the pitch, in a show of support for 2014 Australian of the Year, AFL star Adam Goodes.

The Swans player was recently booed by opposition supporters for his on-field performance of a traditional Aboriginal war cry dance, leaving many in the community stunned and disgruntled. The unfortunate affair has been widely reported on by the Australian media with the Prime Minister stepping up to make a plea for respect in latest ABC report.

“We will be handing out 10,000 leaflets prior to the game promoting this action,” said 303Lowe CEO Nick Cleaver.

“We hope all Swans fans will join as one in support. If we are successful the image of the stadium standing with their backs to the pitch will be pushed out through social media as a powerful and evocative demonstration against racism.”

The senior partners at the agency feel very strongly about the issue of racism and so collectively wanted to do something about it as a group.

“It’s disgraceful the way he’s been treated and as a country we should be making a stronger statement about this kind of behaviour. He is an amazing person and this is a racist issue that should not be tolerated,” added Cleaver.