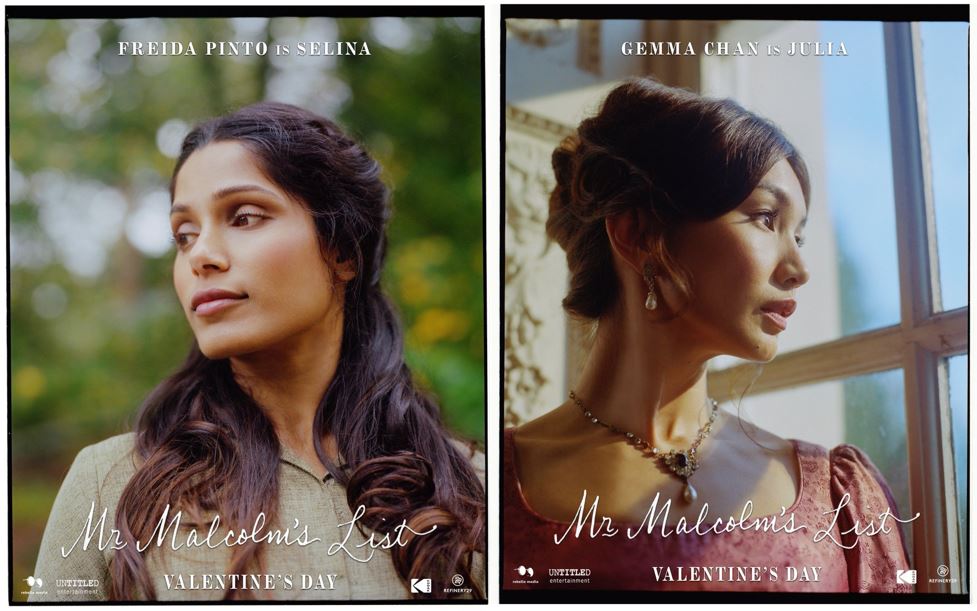 The highly-anticipated short film, Mr. Malcolm’s List (Overture), has been premiered by Refinery 29 in partnership with Untitled Entertainment and Rebelle Media production, in association with Great Guns. Directed by Emma Holly Jones, the film stars Sope Dirisu (The Huntsman), Gemma Chan (Crazy Rich Asians), Oliver Jackson-Cohen (The Haunting of Hill House), and Freida Pinto (Slumdog Millionaire).
Written by Suzanne Allain and based on her script and novel of the same name, Mr. Malcolm’s List is set in early 1800s England and follows a young lady (Gemma Chan) engaging in courtship with a mysterious and wealthy suitor, Mr. Malcolm, unaware of his unattainable list of demands for his future wife.
The Jane Austen-inspired romantic comedy is based on one of the highest-rated scripts on The Black List (an annual survey of Hollywood executives’ favourite unproduced screenplays), as well as its accompanying award-winning podcast. The short film was cast colour consciously, using a culturally diverse cast to reclaim historical narratives that are traditionally played by white actors.
Mr. Malcolm’s List will also be optioned by Refinery29, Rebelle Media, and Untitled Entertainment for a feature film, to be produced by Laura Rister and Laura Lewis and to be directed by Jones. Award-winning producer Alison Owen will serve as Executive Producer.
Laura Rister of Untitled Entertainment comments: "I have always loved championing new voices in front of and behind the camera but getting these works financed is the difficulty. Emma Holly Jones crafted a fresh and modern take on this genre, one that brought chills to all of us, and helped us gain the attention of Refinery29 and this amazing cast. If I could only work on projects with such a bold spin, I’d be a happy producer! Having the opportunity, in partnership with Refinery29, to support a filmmaker and her vision in this way, and to enable the film to get made is a dream.”
Laura Lewis of Rebelle Media comments: "I launched Rebelle Media in order to create commercial content that puts a unique lens on the world and especially how we view women in it. Emma's bold vision for this project immediately piqued our interest, because it shook up the traditional narrative. We are proud to partner with other advocates and creative forces, such as Laura Rister and Refinery29, to bring this project to life as both a short and a feature film."

Director Emma Holly Jones approached Great Guns to facilitate the production in London. Co-Producer, Tim Francis, comments: “Emma had such an intrepid and unique vision, and came to us with a package in place that was strong, female-driven, and backing diversity. We knew straight away that we had to lend a hand in bringing the film to life. We are incredibly proud of the results, and wish her all the success in making Mr. Malcom’s List as a feature length film."
“Mr. Malcolm’s List is the perfect example of quality content created through an inclusive, intersectional lens,” said Amy Emmerich, Chief Content Officer, Refinery29. “[Director Emma] Jones is a force with a fresh voice -- we’re so honoured to be an incubator for her talent and this story, and are thrilled to support this story as a feature-length film.”
Mr Malcolm’s List (Overture) is part of Refinery29’s Shatterbox short film series, which cultivates and spotlights the voices of women directors to tell stories outside the narrow lens of the overwhelmingly male-dominated industry. Now in its second season, the initiative has garnered over 10-million views across the company’s platforms and ushered in the directorial debut of Chloe Sevigny's short “Kitty,” which premiered at Cannes Film Festival, Kristen Stewart’s short film, “Come Swim,” which premiered at the Sundance Film Festival and Anu Valia’s short film, “Lucia Before and After,” which won the Sundance Jury Prize for the Short Film category.
Furthering their commitment to providing emerging female filmmakers with support and continued opportunities to realize their creative vision across multiple platforms, Refinery29 recently announced a partnership with Neon, the studio behind movies such as “I, Tonya” and “Three Identical Strangers,” to acquire and co-distribute female-driven films.
view more - Creative