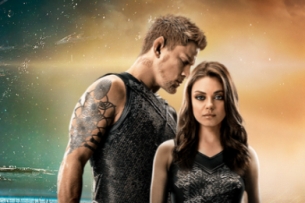 For the premiere of Jupiter Ascending, Warner Bros. Pictures partnered with Thinkingbox to produce an innovative, multi-level WebGL game to support the film’s release. Give it a go here.

Following the storyline of the film, players interact as the main protagonist, Caine Wise, fighting a variety of enemies to save Jupiter Jones from the clutches of the Abrasax clan. With levels of the game pulled directly from key scenes in the film, Caine’s Quest is a first-person shooter game that utilizes cutting-edge technology to create a web-based, ‘platform-style’ game unlike anything else on the market.

Built in WebGL with HTML5, users have the unique option of using their mobile device as Caine's weapon. By pairing their smartphone with their desktop browser via WebSockets, users can fight enemies within the site by interacting on their device. Tapping their screen allows users to shoot and reload, while tilting their device upwards activates the shield to block attacks.

An end-of-game status report shows the user their results, while a leaderboard shows their final position derived from the top 20 users who have played the game. At the moment, there are no other web-based games available that utilize WebGL in such an innovative way while simultaneously delivering high-fidelity graphics and gameplay.