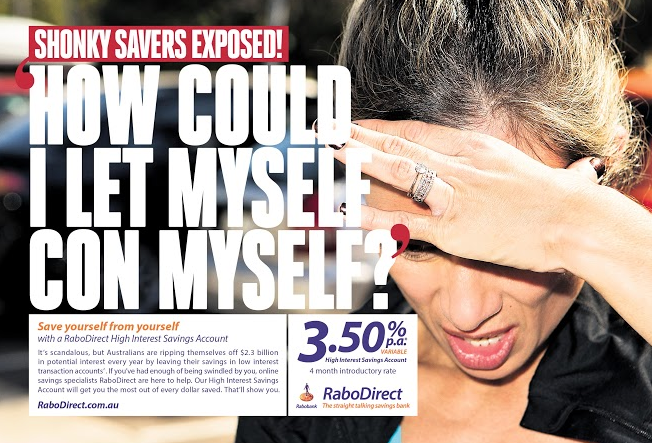 The campaign sensationally lifts the lid on the widespread practice of leaving savings in low interest transaction accounts. As a result, millions of hard working Australians are being ripped off by the person they trust the most: themselves.

Savers who suspect themselves of ripping them off are being urged to dob themselves in and get help at RaboDirect.com.au.

“Keeping your savings in a low interest transaction account is bad. But when over forty percent of the country is doing it – it’s an outrage. A scandal can only be tackled in one way – with the full force of tabloid journalism,” said Wesley Hawes, executive creative director at Whybin\TBWA Group Sydney.

“The campaign is designed to provoke people not to be their own worst enemies when it comes to their savings, while showing that RaboDirect enables them to be part of their own solution,” said Renee Amore, Rabobank Australia & New Zealand general manager of marketing.

The provocative new campaign follows on from Whybin\TBWA Group Sydney and RaboDirect’s ‘Steal back your dreams’ work, the most effective campaign in the Australian finance category over the last four years.