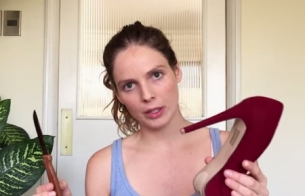 Chile is one of the six countries in the world where abortion is illegal in all its forms. This new campaign from Grey Chile seeks to raise public awareness about the problem, which threatens the lives of thousands of Chilean women using unthinkable methods to perform therapeutic abortions. Click here to view the microsite.

This initiative supports the adoption of the therapeutic abortion act in the parliament.  71% of the Chilean population supports the adoption of such law in cases of forced pregnancy by rape, risk to the woman's life and fetal non-viability. However, even though the bill to decriminalize therapeutic abortion was introduced in February by President Bachelet, strong groups settled near the executive and economic powers are resisting approval.

Media outlets in Chile are very conservative and don’t generate any debate about this important matter. That is why nonprofit organizations and the general population have taken to Social Media to express their point of view.

Grey Chile created this campaign for Miles Corporation with the aim of helping to educate general population about the issue and specially lawmakers to approve the Therapeutic Abortion Bill, presented in Parliament last February by President Bachelet. They have the ability to prevent the death of thousands of Chilean women and reduce the number of illegal therapeutic abortions, estimated over 150,000 cases per year.