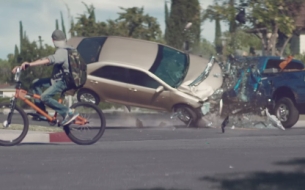 This year marks AT&T’s fifth anniversary of the award-winning, cause-related It Can Wait campaign. For years, AT&T has been focused on curbing texting while driving, but a recent survey found that 7-in-10 people engage in smartphone activities while driving, sparking the campaign to evolve to include other forms of smartphone distractions including social media, web surfing, video chatting, email and more.

Now, AT&T is taking that message one step further with a modern day, integrated and technologically savvy cross-platform campaign, by highlighting the growing usage of smartphones from behind the wheel.  The idea:  no use of social media, web surfing, video chat, email, etc. is worth a life.

Created in partnership with BBDO, AT&T’s creative agency partner, the multi-media campaign launches this week and includes 30 second spots, online teaser ads, a longer-length companion digital piece and a 3D virtual reality simulator, all designed to capture a more lifelike experience of the potentially deadly consequences of glancing at your phone while driving. The different components will run on AT&T’s social media channels such as Facebook, Twitter and YouTube in addition to one of the 30 second ads that will run on TV.