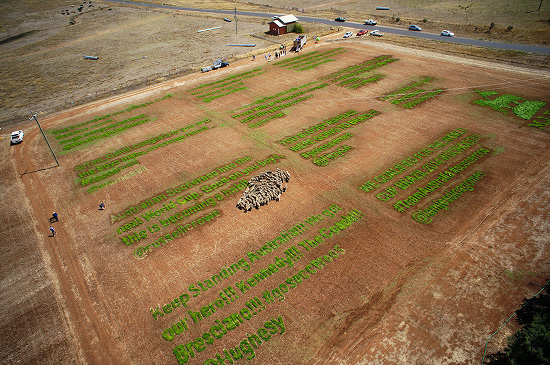 In a world social media first, tweets of support posted by celebrities and media when the Socceroos qualified for Brazil, have been grown into grass on a two acre paddock in Cooma, NSW and then eaten by a flock of 100 Merino sheep, whose wool will then be used to prepare suits for the national team.

The campaign created by Whybin\TBWA Sydney and Eleven PR, grew eleven Australian tweets of support from celebrities and media with the largest Twitter followings, into ‘tweats’ for sheep for the Australian suit maker and official tailor to the national team, M.J. Bale; ensuring the Socceroos will quite literally be dressed in passionate support from celebrities like Hugh Jackman, Shane Warne and Jessica Gomes.

Grown in rural NSW, each ‘tweat’ measured approximately thirty meters wide, all together taking up two acres of land. 100 Merino sheep were released by former Socceroos player, Mark Bosnich and the local Cooma Mayor, Dean Lynch and the sheep’s entrance was accompanied by local singer, Ernie Constance, who sang the national anthem.

Statistics involved with the project:

- The hottest summer Cooma has seen since 1962

Commenting on the project, former Socceroos player Marc Bosnich said, “It is always incredibly encouraging to hear words of support, especially when it’s from the likes of Jessica Gomes. Seeing the tweets grown in grass is just brilliant.”

Dave Bowman, Executive Creative Director Whybin\TBWA Group Sydney said, “Australian pride and passion for the Socceroos was at an ultimate high when the team qualified, so working with the official suit maker M.J. Bale, we wanted to bring this to life in a fun way to show them this support. We hope the team wear their suits with pride.”