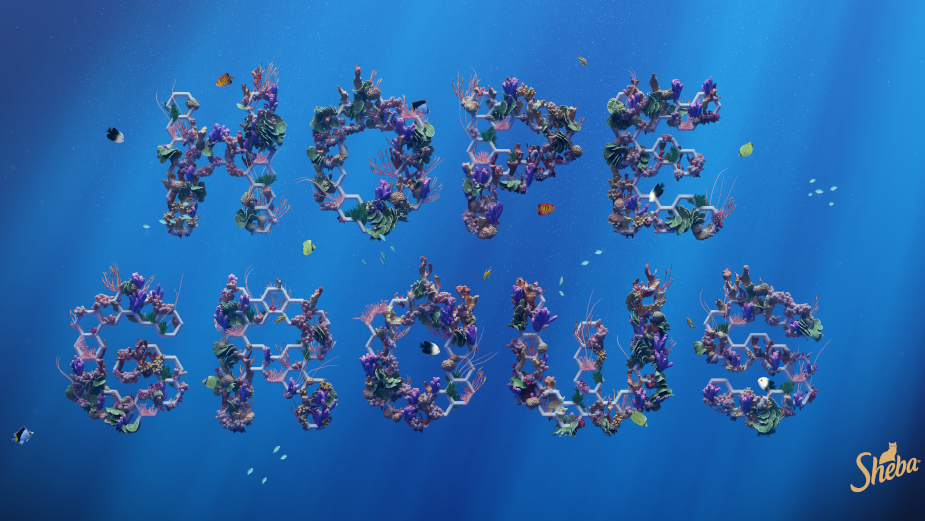 With consumers looking to brands to take an active role in environmental conservation, AMV BBDO are launching through the SHEBA brand, a purpose-led initiative to create hope for the world’s coral reefs and drive action, known as Sheba Hope Grows. The campaign illustrates our commitment to do more as a brand to protect the planet for future generations.

Scientists estimate that if the world does nothing, 90% of the world’s tropical reefs will be gone by 2043, impacting nearly 500 million people who depend on them. The effort to solve this requires global cooperation on a massive scale and through this campaign, SHEBA hopes to play the role of catalyst, helping to ensure the future has coral reefs and fish – as more coral today, will ensure more fish tomorrow. Mars Petcare has made progress towards a longstanding goal to sustainably source 100% of the fish used in some of our pet food recipes. Sustainable fishing depends on the seas’ resources and this can only be achieved by supporting these incredible natural assets. As the oceans’ most diverse ecosystem, coral reefs are at the heart of our efforts and why Hope Reef and our commitment to coral restoration is so important. 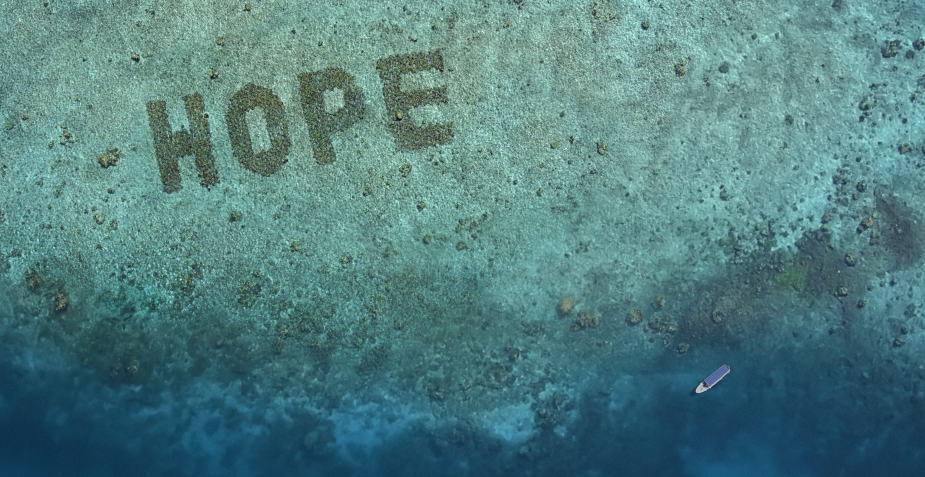 The global launch of HOPE GROWS marks a key milestone in the long term commitment by the SHEBA brand to leading the world’s largest coral restoration program. By the end of 2029, the brand plans to restore more than 185,000 square meters – roughly the size of 148 Olympic Swimming Pools – around the world.

SHEBA Hope Grows is part of a new bold marketing mandate – Building Brands for Mutual Value, which is part of the Mars 2025 roadmap for sustainable growth. Building Brands for Mutual Value focuses on activating the power of Mars brands to make a meaningful and measurable difference. Through this effort, Mars is committing to responsible, sustainable and inclusive marketing, ensuring that every brand interaction creates shared value for the people, pets and partners– and ultimately for the planet.

The HOPE GROWS idea was created by a collaboration between AMV BBDO, Mars Sustainable Solutions and the SHEBA brand team. It has been brought to life by key partnerships with The Nature Conservancy, Google and National Geographic Creative Works.

The idea was to build Sheba Hope Reef, a living, thriving coral reef, planted in August 2019 on a site where there was once only barren, dead coral rubble. The reef, at the heart of the Coral Triangle located off the coast of Sulawesi, in Indonesia’s Spermonde Archipelago, was built using innovative coated structures known as Reef Stars, showing that there can be man-made solutions to man-made problems. The reef spells out a message, ‘H-O-P-E’ and in doing so creates a living billboard, that puts the urgency of the issue and its potential solution on the map. Reef Stars were also used as the basis of a bespoke visual identity – creating an animated growing coral typeface for use in outdoor, social and online. 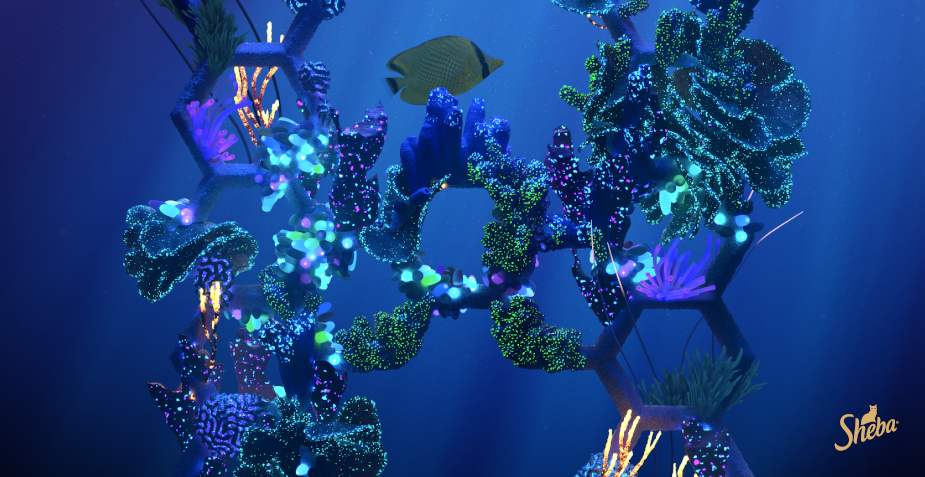 Discoverable on Google Maps and Google Earth, and viewable underwater in Google Street View, the reef and accompanying campaign has been designed to inspire people to take action to restore coral reefs.

To promote the campaign and raise funds for the cause, in partnership with Google, the SHEBA brand has flipped the traditional brand – YouTube relationship on its head. Instead of being an advertiser, the brand has become the content creator, with all ad revenue generated from its ‘Channel that Grows Coral’ donated to The Nature Conservancy for coral restoration. This simple, unique mechanic lets consumers become actively involved by watching and sharing the engaging content, growing hope for coral reefs from home. This is the first time ever that 100% of the funds from a branded YouTube channel have been monetised for sustainability efforts.

The hero film which sits on the 'Channel that Grows Coral', follows the moving story of a little blue fish travelling from barren rubble to thriving restored reef. It has been narrated by actress Juliet Stevenson with soundtrack by composer Biggi Hilmars for Radford Music. An extended version of the song 'Hope Grows' will be available from 13th May on all streaming platforms with all proceeds donated to coral restoration.

Jane Wakely Mars, Incorporated CMO said: “At Mars, we want to harness the power of our brands to make a positive difference.  Through our Building Brands for Mutual Value strategy we are re-imagining the whole concept of brand-building and the value they can bring to the next generation. We know that our consumers expect great quality food for their pets but they also want a brand that make a positive difference. The loss of the world’s coral reefs requires urgent attention, and with our Sheba Hope Grows campaign, we want to show the world that positive change to our oceans is possible and create a movement to grow hope.”

Alex Grieve, chief creative officer at AMV BBDO said: “An extraordinary problem requires an extraordinary solution. All the traditional ways of working had to be abandoned and reimagined. In the end the most audacious idea became the idea. The way to save the world’s coral reefs was to build a coral reef. A literal symbol of Hope. This project is not just an example of how the power of creativity can solve new problems in new ways but also heroes the power of partnership between agency & client. Conceiving, planning and building a reef, not just for now but for the next 10 years, takes time and trust.”

Launched on a global scale in ten key markets for SHEBA, the 360 integrated campaign Sheba HOPE GROWS, will share the ambition of Hope Reef and its philosophy with consumers across the world. The experience comes to life across digital, social, Google Maps, OOH, ecommerce/website launch, influencer activity, globally earned PR, and in store. SHEBA has also partnered with the world’s leading visual storytellers, National Geographic, to tell the story of Hope Reef and illuminate the importance of reefs to life on earth. The launch marks an exciting moment for SHEBA in showcasing its commitment to environmental action.

The campaign supports Mars Petcare’s ongoing sustainability initiatives with SHEBA committed to helping make a difference to the planet, inspired by the largest part of its menu line up - fish. Since 2008,  Mars, Incorporated, the parent company of the SHEBA brand has invested more than $10m in research, coral colony construction, and community engagement as part of its coral restoration program.

In addition, the company has invested $1 billion to drive action for the protection and restoration of the planet and those who inhabit it through its Sustainable In A Generation Plan. The Sheba Hope Grows launch illustrates Mars’ commitment to delivering long term value beyond profit and ultimately, making a positive difference through marketing.