Share a Parting Glass with We Are Social's New Tullamore D.E.W Campaign 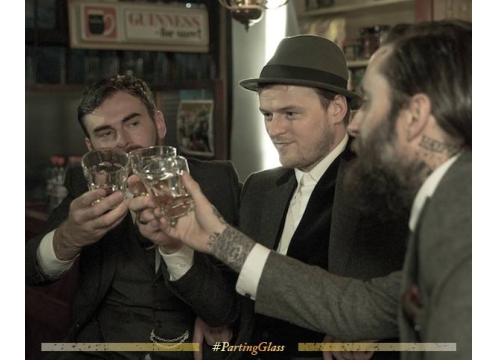 Following on from its critically acclaimed ‘The Parting Glass’ film in 2013 and in preparation for the opening of its new distillery this September, Tullamore D.E.W. Irish whiskey has launched the 'Parting Glass' campaign, a global online search for the best toasts to mark the beginning of life's new chapters.

The latest installation of the 'The Parting Glass' campaign includes a global competition, where people can share their own images or video to toast a milestone in their lives and win a trip to Ireland, and a series of short shareable toasts featuring the cast from the original film which can be customised and shared with friends via www.TullamoreDEW.com

The original ‘The Parting Glass’ short film was created by New York agency Opperman Weiss and followed four friends through the rolling green hills of Ireland as they raised a parting glass toast to their friend on his wedding day. The newest instalment sees the friends move on to the pub to celebrate the nuptials and raise a glass in the couple’s honour. From a new job to a milestone birthday, a series of endings were filmed to make the content relevant and shareable to Tullamore D.E.W.’s fans on social media.

The latest iteration of the campaign was created by global social media agency We Are Social with New York agency Opperman Weiss leading creative/ production with director Laurence Dunmore of Ridley Scott's RSA Films. Filming was shot on one balmy June day in Tutty’s Pub in Hollywood, Co. Wicklow – the same town where the original content was created.

Caspar MacRae, Global Brand Director, Tullamore D.E.W., commented: "The ‘Parting Glass’ film was a huge success for Tullamore D.E.W. and put us on the world stage as a brand that could create credible engaging content for our audience. As we developed plans to build anticipation ahead of the opening of our new distillery this September, it felt right that we would follow on from this success and create the next chapter of the story, this time allowing our fans to get involved too.”

He continued, “We look forward to seeing the Parting Glass toasts shared with us and choosing the best entrants to join us at our distillery opening celebrations in Ireland”.

‘The Parting Glass’ original film has picked up a range of awards including a Silver Lion from Cannes Lions and a 'Creativity Pick' Award from the editors of Creativity at Ad Age.