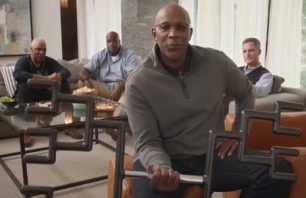 AT&T is launching a new round of “Legends” work just in time for the NCAA March Madness tournament.  Like its college football championship predecessor, this latest campaign features a star-studded group of athletes readily associated with the televised sport.  In this instance, a cast of NBA/NCAA superstars including Shaquille O’Neal, Julius “Dr J” Erving, Clyde Drexler and Christian Laettner.   Together, they help bring to life AT&T’s message as “the network with the nation’s strongest 4G LTE signal.” The campaign was created by BBDO NY and BBDO Atlanta.

In the first of two TV spots, “Strong Nickname,” Shaq reveals he had yet another nickname.  In “Strong Team,” Christian Laettner reminds the other legends of his strong college career.  The campaign then goes one step further than before, adding a series of social and on-air pre-roll promos referred to as “Tourney Tips,” where these legends dispense tips to fans on how to stay strong throughout the tournament.  The first pre-roll tips to drop are “Bracket Curls” and “Upset.”