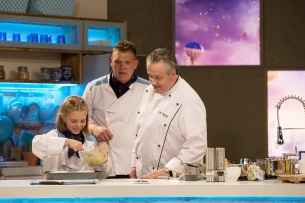 Integrated advertising agency Seven Different Kinds of Smoke has, in an unprecedented move, along with their client Clover and production company Quizzical Pictures won a Golden Horn at the SAFTAs (South African Film and Television Awards.) The SAFTAS celebrate outstanding talent in the local film and television industry. Seven Different Kinds of Smoke had two finalists in the gameshow category in the form of Tropika ‘Island of Treasure’ and Clover 'Little Big Cook Off’ with Clover 'Little Big Cook Off’ winning for best game show.

The Clover ‘Little Big Cook Off’ competitive cooking show is a promotional campaign that is unique for several reasons. One of them being that it was the first parent and child cooking show to ever grace television in South Africa. The game show was devised by advertising agency Seven Different Kinds of Smoke for their client Clover to provide viewers with entertainment and recipe ideas, where the recipes necessarily included products from Clover’s range. The cooking show essentially gives consumers new ideas and ways in which to use the Clover brand products.

Clover has traditionally been strong in the milk category, but the competition allowed the brand to boost the strength of the other categories that the brand offers. What the campaign achieved was to get the consumer to better understand the diverse offering of the Clover product range in a simple, entertaining and effective way.

The results exceeded the agency and client’s expectations. The game show averaged 700 000 viewers per episode despite having to compete for viewers during the Soccer World Cup. In fact, the viewership was the highest for any cooking show in the country in 2014 exceeding Masterchef South Africa. There were over 150 000 entries into the ‘Little Big Cook Off’ competition which drove double digit sales for Clover during the call to entry phase.

“The goal was never to merely drive viewership. That said, it is great because over the course of thirteen episodes, people got to engage with the brand once a week, for forty five minutes, as opposed to thirty second engagements at a time for a traditional tv ad.” says James Cloete, Executive Creative Director and partner at Seven Different Kinds of Smoke.”

The Clover story is an example of really understanding your consumers and then devising ways to entertain them, which is ultimately how you engage.

Clover used digital platforms to boost engagement during the show, but what the results also reveal is that the television program still had the greatest reach driven by the unique way in which the game show connected with its consumers. “So instead of turning you off, or changing channels, as you would for ad breaks, they’re making an appointment to view you.” shares James Cloete. “This is the philosophy that drives our core business at Seven Different Kinds of Smoke, regardless of what platform you are using authentically connect with the habits of your consumer.”

“To make great work that works you need to do things differently and that requires great production partners and most of all smart, brave clients. We’ve been lucky enough to have had both and we’re very excited to work with them all again now as we build up toward the airing of season two,” concludes James.