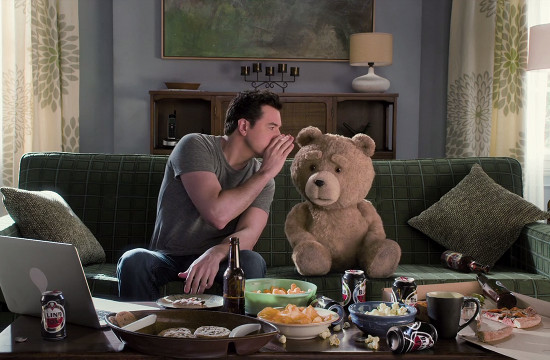 Fans of Seth’s hit film Ted will be happy to see a cameo from the memorable foul-mouthed bear in the spot, which features Seth and Ted in a scene familiar to many as they watch the Super Bowl on the couch. In the clip, Seth laments the rejection of the “Million Ways” trailer to play during the game’s coveted advertising time, saying the R-rated promo was denied for not being “family friendly.” The duo serves up some customary bawdy banter before directing viewers to watch all the restricted raunchiness in the film’s restricted trailer online at www.AMillionWays.com.

Seth MacFarlane directs, produces, co-writes and stars in A Million Ways to Die in the West alongside an A-list cast that includes Charlize Theron and Liam Neeson. The film is being released by Universal Pictures and is slated to hit theaters May 30th.