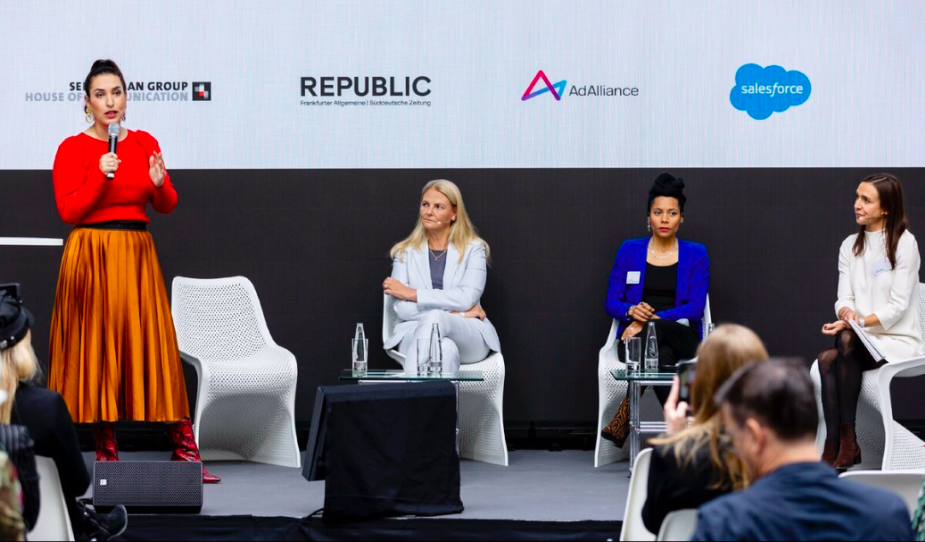 The physical and digital event worlds have long turned into one. This was also the case at the 17th Innovation Day, which the Serviceplan Group organized on 29 September together with its partners REPUBLIC, Ad Alliance and Salesforce. This year's keynote theme: 'A HUMAN-DRIVEN FUTURE. How people are shaping the digital tomorrow' was put into practice by the organisers at the first-ever hybrid event.

More than 400 board members, managing directors, brand managers and top international speakers from business, media and politics attended the Innovation Day partly digitally, partly live in the House of Communication, yet interacting with each other at all times.

"In the last few months, we have had a digitalization push on all levels. But for all the discussions about data & tech and technological progress, one thing above all is now becoming apparent: at the end of the day, the focus is on people. The human factor as an essential and irreplaceable driver of innovation and further development is more important than ever," with these words Florian Haller, CEO Serviceplan Group, welcomed his guests. 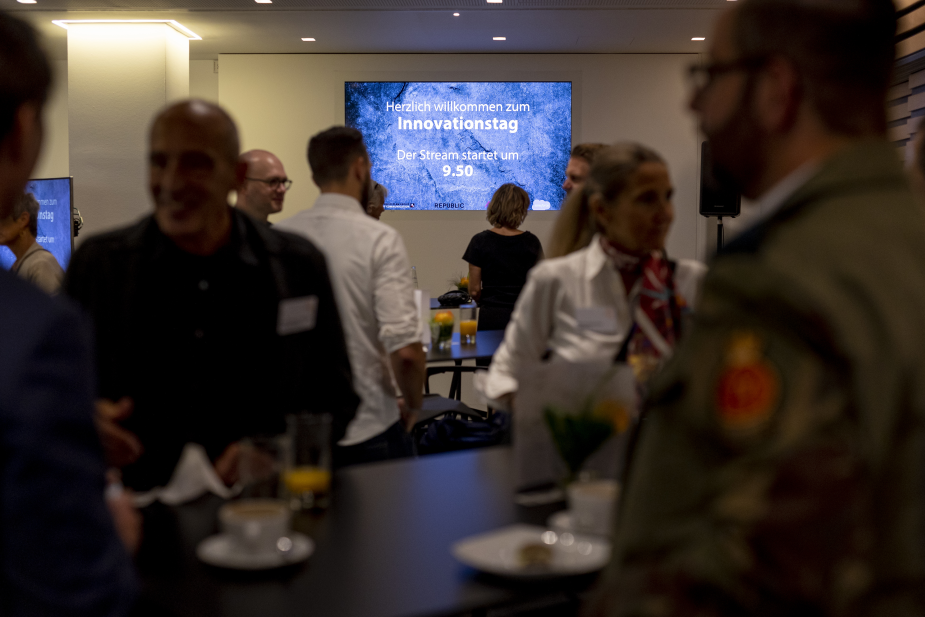 In the meantime, we are at home in both worlds. The more than 130 guests on site at the event were able to feel at home in the home office corner in the House of Communication, for example. The more than 280 digital participants, on the other hand, experienced the event either from the perspective of an audience member equipped with a Go-Pro or were able to have their say directly on stage via the red telephone. A hybrid chat, in which guests from both worlds could participate, made the fusion perfect. In the other German Serviceplan Group locations – Berlin, Hamburg, Cologne and Bremen – guests also had the option of networking on-site at joint afterwork and lunch events. 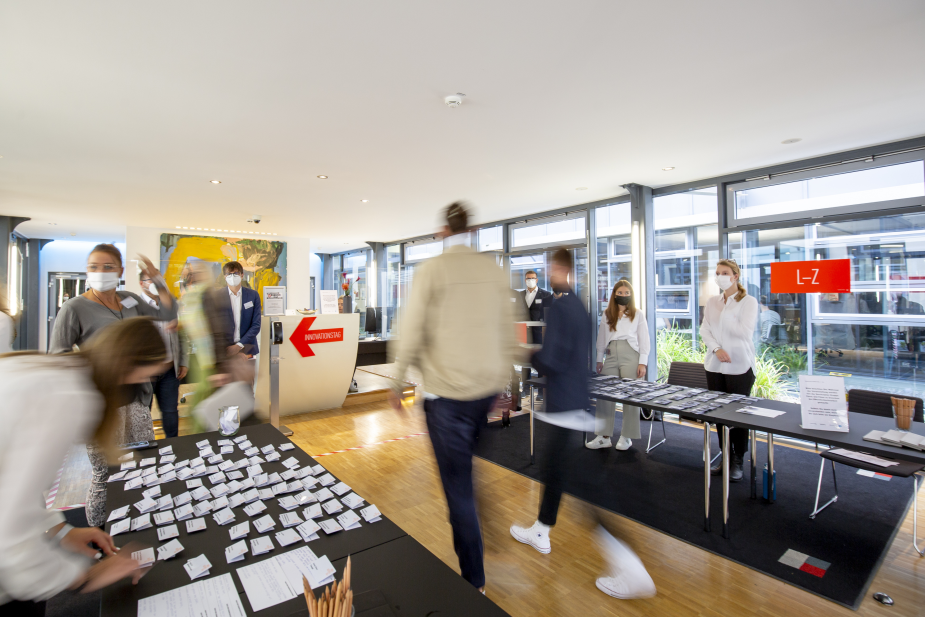 What drives people? Which megatrends are currently influencing society, brands and the economy? And how will people shape the digital tomorrow? These were the questions discussed by top international speakers in six thematic blocks: Politics, Diversity & Inclusion, Healthification, Hybrid Thinking in Retail, New Work and New Creativity. The on-site program was led by journalist and moderator Wolfram Kons.

Tim Leberecht, co-founder of the House of Beautiful Business and one of the most astute thinkers for a new humanism in business and society against the backdrop of digitalization and artificial intelligence, kicked off the program. Is humanity ready for a new age of romance? This was the central question of the keynote, in which Leberecht drew a parallel to the Age of Enlightenment: "Against the backdrop of AI and automation, the question 'What makes us human?' simultaneously becomes the question 'What actually still makes us special as a brand, as a company? Leberecht's answer: "If everything that can be done efficiently is done even more efficiently by machines, then the most important work for us humans will be that which must be done beautifully with dedication, imagination, intuition, empathy and passion." Leberecht lays out three rules for business romantics: Do the unnecessary, create intimacy and let go. 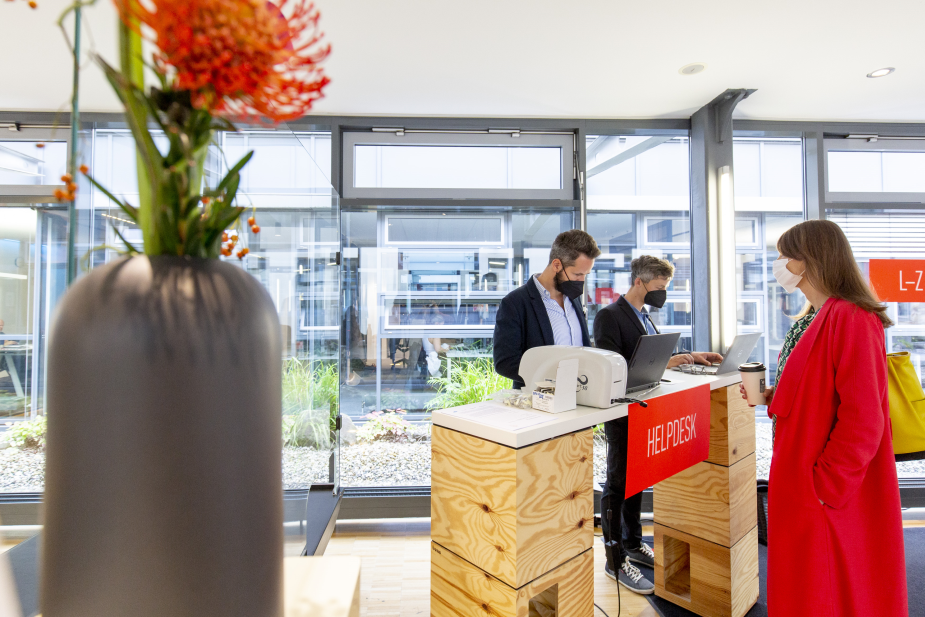 "A Human-driven Future" – the motto can also be applied to the current exploratory talks between the parties. Judith Wittwer, editor-in-chief of the Süddeutsche Zeitung, and Carsten Knop, publisher of the Frankfurter Allgemeine Zeitung, discussed the results of the Bundestag elections. Both experts of the political scene forecast: Olaf Scholz will be the next chancellor. And the traffic light coalition will come about. The parties have become more flexible, there are overlaps despite all the differences, and there is a great willingness to look for common ground instead of dividing lines. 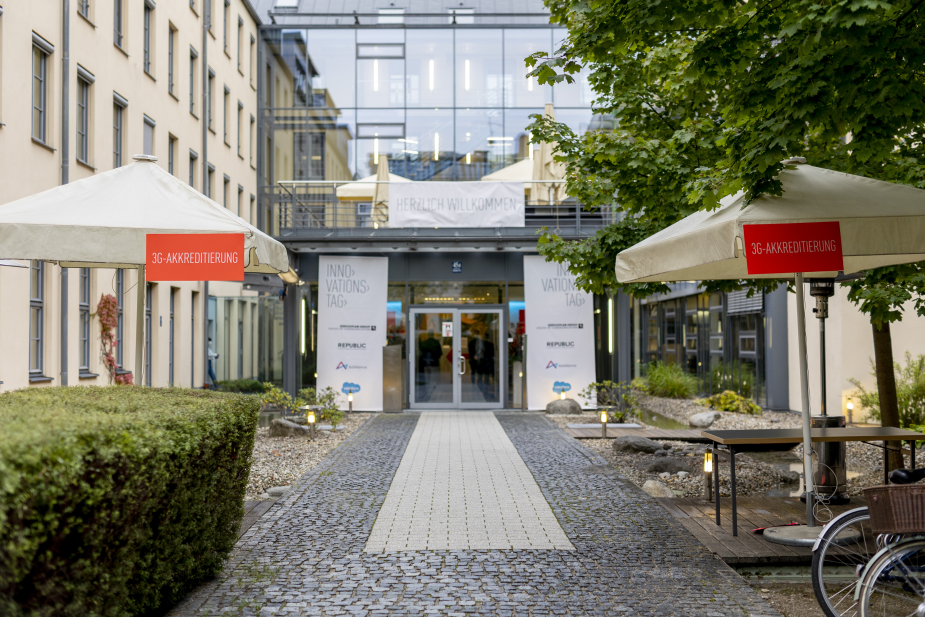 Building bridges, allowing different points of view - this applies not only to parties, of course, but in every area of life, especially in corporate culture. "We need to create a new form of culture of trust: Namely, appreciation of difference," demands Emilia Roig, founder, best-selling author and director of the Center for Intersectional Justice as the opening speaker of the next block on Diversity & Inclusion. "Those companies that manage to become diverse are poised to change their culture. On the other hand, if language and culture are still discriminatory, you can't integrate other people."

Ana-Cristina Grohnert also calls for a shift in thinking toward more diversity in management. After all, diversity ensures that companies become more successful. The chairwoman of the "Diversity Charter" employer initiative explains: "Innovation only comes about through cooperation and teamwork. We need to create a new form of culture of trust, namely appreciation of difference."

In this, she agrees with Tijen Onaran. The entrepreneur & author is one of the most prominent faces for gender equality in Germany. "Diversity is not a charity object, but the component for good sustainable business. As an entrepreneur, I believe I am better with a diverse team. This also applies to investments and brand management. It's important for brands to appear diverse because you're communicating with customers and clients who are maximally diverse." Following the keynote speeches, the three speakers joined Bettina Prange, Managing Director House of Communication Hamburg and responsible for the Serviceplan Group's Diversity Program, for a joint discussion.

From diversity to the next megatrend: healthification. Wellbeing and health have become central topics for customers and thus for the industry. Many trend experts predict that every brand will also be a healthcare brand in the future. Thomas Schulz, SPIEGEL correspondent, bestselling author and Silicon Valley expert, introduces future scenarios and exciting facts. Developing a vaccine in a few months, detecting cancer before it breaks out, an AI-controlled heart attack warning, living more than 100 years – unthinkable in the past. "But we've noticed recently how quickly utopias can become reality." DNA or gene analyses are becoming standard tools. This is made possible by the massive entry of information technology groups such as Google and Microsoft into the healthcare market.

Bosch Siemens Hausgeräte GmbH is also benefiting from the healthcare boom. Michael Bohn, Head of Marketing Central Europe, presents the new communication strategy "Simply Healthy", which his company has developed for its products based on the four health-related fields of fitness, nutrition, deceleration and protection. The quietest dishwashers or dryers gave rise to a new philosophy and the successful campaign with the slogans "Healthy living #Like a Bosch" and "Sustainable living #Like a Bosch," which became cult spots on YouTube and TV.

Cate Trotter is one of the most influential international retail experts on the subject. According to the founder and Head of Trends at the future agency Insider Trends, online and offline retail are merging. The future of retail is Hybrid Thinking. One of the examples she presents is Adidas.

The sporting goods company seamlessly links customer experiences on site and on the web and "uses the physical space to encourage customers to connect digitally," Trotter says. She is convinced, "I expect that stores will gradually cease to be the center of the brand ecosystem - instead, the product will take center stage." As a result, even big brands will have only a handful of stores around the world, say in ten capitals on five continents. These will be experiential locations where customers will learn about the products, but then go home and shop online.

From the future of commerce to the future of work. Hardly anyone can report as many exciting, surprising and visionary things about the workplace of the future as Raphael Gielgen. As a Future of Work Life & Learn trend scout at Vitra, he explored the "source code" of the working world in conversation with Karin-Maria Schertler, General Manager at Serviceplan and an expert on New Work. His principle: "Don't ask people how they want to work in the future, but what the working environment must look like in which a person can work productively." The office has lost its monopoly as a place to work, Gielgen believes. "The whole city is the office." People simply get the work environment and also the colleagues they need to cooperate wherever they are. Here, too, digitization and, above all, technologies such as AR and VR will make everything possible in the future.

Creativity and art are inseparable at the House of Communication. After the coffee break with an opportunity for networking, Markus Lüpertz brought the day to a close. The renowned painter, graphic artist and sculptor - known as one of the most successful representatives of German contemporary painting - provided food for thought on the connection between art and advertising during a "Talk of Creativity" with Alexander Schill, Global Chief Creative Officer & Partner Serviceplan Group: "Creativity is the genius of the craft, and that applies to all disciplines - whether art or advertising." 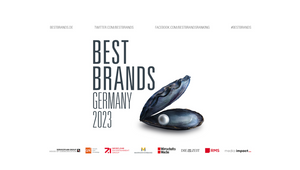 20th Anniversary of Best Brands: Big Reveal of the Top 10