Agency group was awarded with three Best of the Best Awards and six Red Dot Awards. 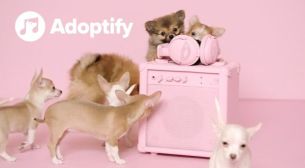 Serviceplan Group enjoyed unprecedented success at the 2018 Red Dot Communication Design Awards, winning a total of 9 awards, a significant improvement in the 2017 performance, when Serviceplan was awarded 1 Red Dot.

The Red Dot Award: Communication Design has been awarding excellence in design and innovation since 1993.

View the case films below and the adoptify website here.