The integrated campaign will be launching in 20 countries 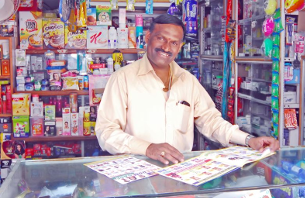 Tomorrow, METRO Cash & Carry is celebrating the first ever “Own Business Day” in more than 20 participating countries. They founded this day to celebrate independent business owners worldwide. As the lead agency of METRO Cash & Carry since September 2014, Serviceplan Campaign was responsible for the idea, creation and implementation of the global campaign and – in partnership with the digital group ACTUM – the launch of the digital platform own-business-day.com.

In the future, the second Tuesday of October will be a special day on which METRO Cash & Carry connects business owners even closer with their customers. This day will feature business owners’ special offers and promotions, which they will upload for customers to find on the online platform. “We want to celebrate the millions of passionate, independent business owners whose businesses are not only the economic pillars of our society, but are the heart of any neighbourhood. METRO wants to pay tribute on Own Business Day to these often unacknowledged heroes and to support them the best way we can—helping them have an extraordinarily successful business day,” explained Gisele Musa, Global Director Branding & Activation at METRO Cash & Carry.

Serviceplan Campaign Hamburg developed and implemented the accompanying integrated campaign, which simultaneously brings attention to the day in more than 20 countries and is targeted toward not only METRO’s 21 million existing customers but towards all independent business owners. The agency was also – together with the digital experts of ACTUM and Plan.Net Hamburg – responsible for the online platform own-business-day.com, on which owners could post special offers. Customers could view the offers on the platform’s map to find out what happening in their area on October 11th. 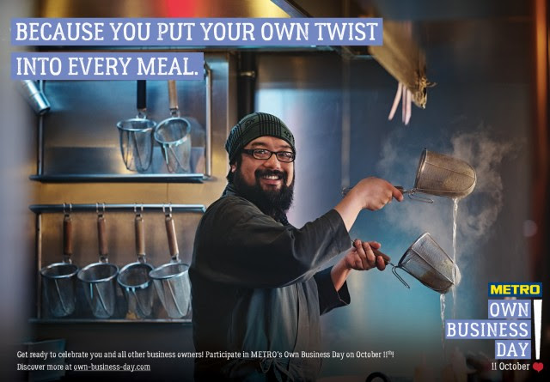 Each participating METRO country used a combination of TV commercials, print advertisements (e.g. billboards), online advertising material, and/or social media to highlight Own Business Day. Filmed and photographed by Stuart Douglas, the ads’ twelve vignettes and motifs do not show professional models or stock images but rather portray actual business owners in their places of work. Striking headlines and voiceovers show the love business owners have for their own businesses and the values, great joy, and passion these people bring to their daily business. In the ramp up to the day, billboards, ceiling banners, posters, stand-up displays, shopping bags, and in-store radio or video screens spread the word about Own Business Day at all participating METRO stores. Newsletters and stickers on METRO trucks created even more attention. The song “Your Own” was commissioned for the day and used in accompanying videos and radio spots. Additionally, early on, METRO stores received marketing kits, including notebooks, stickers, stamps, sales folders, t-shirts and online materials, which their customers could use to promote their specials and businesses to their own customers.

More than 20,000 specials were created by participating businesses, whether bars, restaurants, or shops.

“This first, integrated, global campaign is a milestone for METRO in the sense that it is a strong brand communication. Being a connecting element between business and consumer and supporting communication to our customers’ target groups are the next steps on the path towards having an even more globally-oriented, uniform, customer-oriented brand communication. We are very proud to accompany and support METRO on the further development of this strategy and communication,” shared Michael Schneider, Managing Director of Serviceplan Campaign Hamburg.

Since September 2014, Serviceplan Campaign has been the global creative lead agency for METRO Cash & Carry. METRO Cash & Carry is represented in 25 countries with over 750 self-service wholesale stores. With a headcount of about 110,000 employees worldwide, the wholesale company achieved sales of around €30 billion in financial year 2014/15. At this year’s Cannes Lions International Festival of Creativity, Serviceplan and METRO won a Silver Lion for the work "The Daily Catch".