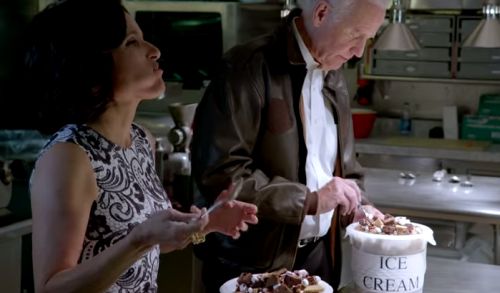 Before President Obama took the stage at Saturday’s White House Correspondents’ Dinner, the elite politicians and Hollywood celebrities in attendance watched the evening kick off with the now-viral opening video directed by Maurice Marable. The 7-minute parody features Julia Louis-Dreyfus as her Veep character Selina Meyer, teaming up with the real Vice President Joe Biden to ditch the annual “Snorespondents” gala. The duo causes all sorts of mischief around the capital in Biden’s yellow Corvette, with surprise cameos from Michelle Obama, Nancy Pelosi and John Boehner along the way.

HBO enlisted Maurice Marable to direct the top-secret video, who previously worked with Julia Louis-Dreyfus on a promo campaign to kick off Veep. Bringing members of the administration into a mix added a whole new set of challenges. Approval of each line in the script (which was penned by the Veep writers) had to go past the highest office, meaning lightning quick rewrites. The biggest challenge, Maurice says, was the sheer businesses of the politico cast, whose schedules allowed for literally just minutes with them. Maurice shot the scene in which the health-conscious First Lady catches the two guilty Veeps sneaking some ice cream in only 15 minutes.

Without the presence of an agency, the only barometer was whether or not the scene at hand passed the “is this funny?” test.  With its quotable zingers, and the unlikely image of Nancy Pelosi at a tattoo parlor garnering the video over 1.5 million views already – it’s safe to say that test was passed many times over.

Maurice Marable has established a strong relationship with networks like HBO and Showtime over the course of his evolving career. Maurice was responsible for the creative direction of on-air campaigns for HBO’s top shows including The Sopranos and Sex and the City prior to stepping behind the camera and directing the stylized trailers for iconic shows such as Entourage, Six Feet Under, True Blood, and Big Love.

Maurice has been represented by Believe Media for commercial work in the US and internationally for over a decade, where he directs spots for brands such as Direct TV, Verizon, Wells Fargo, AT&T, and the U.S. Marines.  Recently, Maurice founded Brim + Brew, a boutique company that creates, produces and executes on-air marketing campaigns for television networks.  Brim + Brew has developed and launched the promos for shows like CNN’s Emmy-winning Anthony Bourdain Parts Unknown, Morgan Spurlock’s Inside Man, Oxygen’s Preachers of LA, BET’s Being Mary Jane, and HBO’s new John Oliver show, Last Week Tonight.