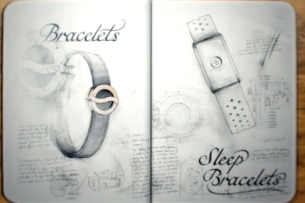 The Mill+ team in London collaborated with Philip Stein, a developer of Natural Frequency Technology, with the aim of developing watches that improve the wearer’s quality of life, to create this 2 minute film featuring hand drawn time-lapse sketches, 3D and 2D animation.

The Mill+ team, led by animation directors Kwok Fung Lam and Ivo Sousa, were challenged with creating a book, showcasing the study of the technology behind Philip Stein products through the ages.

The film begins with Leonardo Da Vinci inspired sketches, with a modern look and feel developing towards the end of the chapter.

Ivo Sousa comments, “The sketches were all hand drawn on paper as we were aiming to achieve a classic draughtsmanship quality. The sketches would be scanned in every so often, with the end result becoming a time lapse of the completed drawing. The drawings were put together in After Effects and inkblot reveals were added, along with typography.

The book was built and animated in 3D, whilst the pages were animated in 2D, combining typography and sketches. Once all assembled in After Effects, effects such as light, particles, frame rate manipulated and colour grading were added on.”