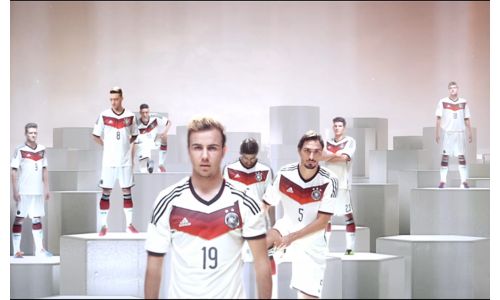 The Mill teamed up with directing duo Alex & Liane to create this World Cup 2014 inspired spot for Mercedes.

This latest ad for Mercedes features the German national football team, who the car brand is sponsoring in this year’s FIFA World Cup. Set to Rudimental’s hit track ‘Not Giving In’, we see a combination of car and football related shots, which move through the Mercedes logo, finishing up on a packed pitch full of supporters.

A selection of elements were carefully crafted in CG by The Mill’s 3D team including a CG Car, stadium, shirts, balls and environments. The montage of live action shots and CG elements was then weaved together into one fluid motion in Flame to form what looks like a single camera movement that then moves through the Mercedes logo.

In the hands of our talented artists we used Flame, Nuke, 3D Equalizer, Maya and Arnold to create and augment 16 individual shots which were expertly conceived by Alex and Liane and our concept team."