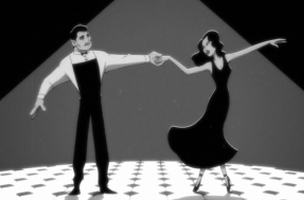 For centuries Dons of Tequila have risked everything to create Jose Cuervo. To celebrate over 250 years of this history, Jose Cuervo commissioned Blinkink directors Elliot Dear and Stephen McNally to create a series of richly animated films.

Elliot undertook two films: The Battle For Tequila and The Margarita, which incorporated a wide range of techniques, drawing upon his extensive knowledge of film and animation. For his first project with Blinkink, The Alchemist was created and directed by Stephen McNally.

Retelling the tales of the Dons, the films offer up the rich history of the brand. Each film has a unique tone, story and character, and as a collection they contain a vibrant and refreshing assortment of animation and film techniques.

Elliot crafts an epic retelling of the battle to protect the original Jose Cuervo distillery. A miniature recreation of the town of Tequila, the birthplace of Jose Cuervo, was created after a successful research trip to the town in Mexico.

These miniature models found traditionally in stop-motion shoots were then combined with modern techniques. Performers shot in cinematic slow motion, along with special effects, were composited onto the scaled town to create the grit of the battle for Tequila.

Inspired by film noir and the work of Frank Miller, Elliot worked with friends Premise Entertainment in Florida to tell the tale of the sultry origin of the Margarita cocktail. To create this masterful mystique around Margarita, Elliot seamlessly blended premium 2D animation with dramatically lit CG backgrounds.

Stephen creates a sumptuous and spellbinding world to tell the story of Don Fransisco, the master distiller still presiding over the Jose brand.

Using his unique blend of CG worlds and 2D painted textures, Stephen’s film has his trademark lighting and atmospheric stamp on it.