Sécurité Routière Asks 'When You Look at Your Phone, Who's Looking at the Road?' 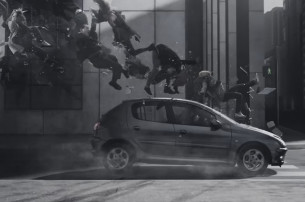 David’s cruising peacefully through downtown. Then he receives a text message. And, even though he’s driving, he can’t resist the urge to read it. Just a few seconds, he thinks. The effects caused by this brief moment of distraction are irreversible. He doesn’t see Julie, a young girl crossing the street in front of him….  walking home from school.

As children head back to school, the organization Sécurité Routière, which promotes road safety, and agency La Chose, are setting out to raise awareness about the dangers of using your phone behind the wheel. The new film, ‘The Last Class’ highlights the importance of concentrating on the road. The graphic black and white images are designed to shock viewers, emphasizing the gravity of the risks involved and the association’s slogan, ‘all affected, all concerned, all responsible’ stresses the wide-reaching repercussions of the driver’s actions.

Created by La Chose and directed by Bruno Aveillan, ‘The Last Class’ is the latest film in an ongoing campaign which seeks to raise the public’s conscious about the the turmoil created by road accidents. It reminds us that victims as well as their loved ones, friends, and colleagues are all affected.