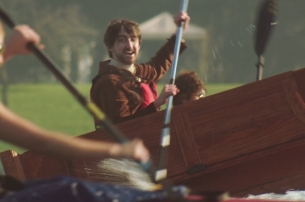 Annex Films’ comedy and performance director Sebastien Petretti has added his distinctive style to an amusing series of TVC’s for Italian brand Subito.it.

In the new spot for the Italian buying & selling site, we see a fellow who'd rather have himself a kayak than a big old wardrobe cluttering up the place. Through simple use of the Subito.it site, the dusty piece of furniture is exchanged for a brand spanking new kayak (and possible an instructor).